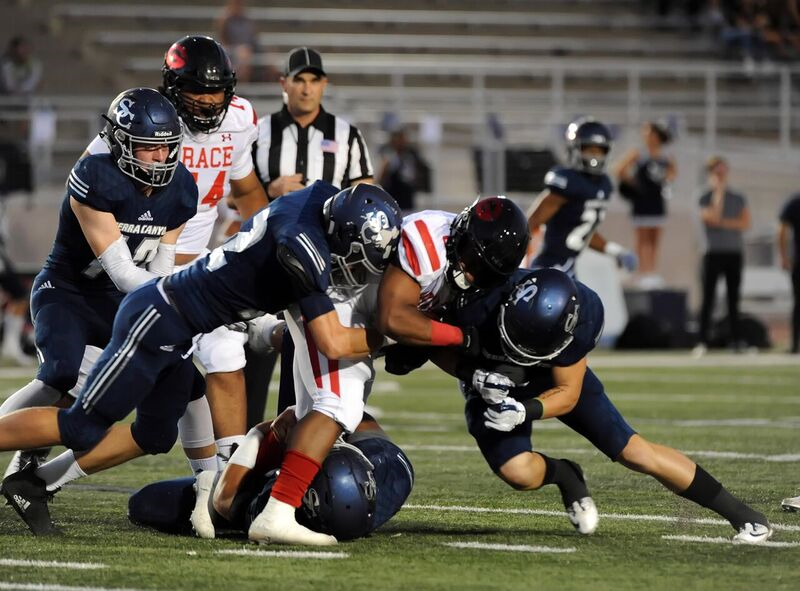 Trailing 17-13 late in the game, Hunter Williams capped an impressive 80-yard drive with a 5-yard touchdown run for the winning score.

The Trailblazers had to make one last defensive stand and did. The defense took down Lancers quarterback Mikey Zele in the backfield on fourth-and-six from near midfield with under one minute remaining. Despite having two timeouts, Grace Brethren, last year’s Div. 8 champion elected to let the clock run out.

Sierra Canyon took a 13-3 lead into halftime and seemed to be in command. Josh Bryan’s two field goals from plus 35-yards out and a short 4-yard touchdown run by J.D. Sumlin accounted for their points.

Grace Brethren would not quit and go away. Lontrelle Diggs was a one-man wrecking crew in the second half and scored two touchdowns, the second to give the Lancers their four-point lead.

Diggs and Zele combined to rush for 208 yards on 37 carries to lead a punishing ground attack. Grace Brethren rolled up 266 yards on the ground on a whopping 48 carries. The Lancers only had 25 yards through the air.

Sierra Canyon was on the wrong side of two calls which thwarted scoring plays. JJ Hernandez caught a 38-yard pass from Peery and crossed the goal line as he was being tackled. The officials ruled the ball was loose, apparently, before Hernandez reached the end zone.

Sierra Canyon has won three games in a row after a frustrating 0-2 start and travels to Bakersfield next week.