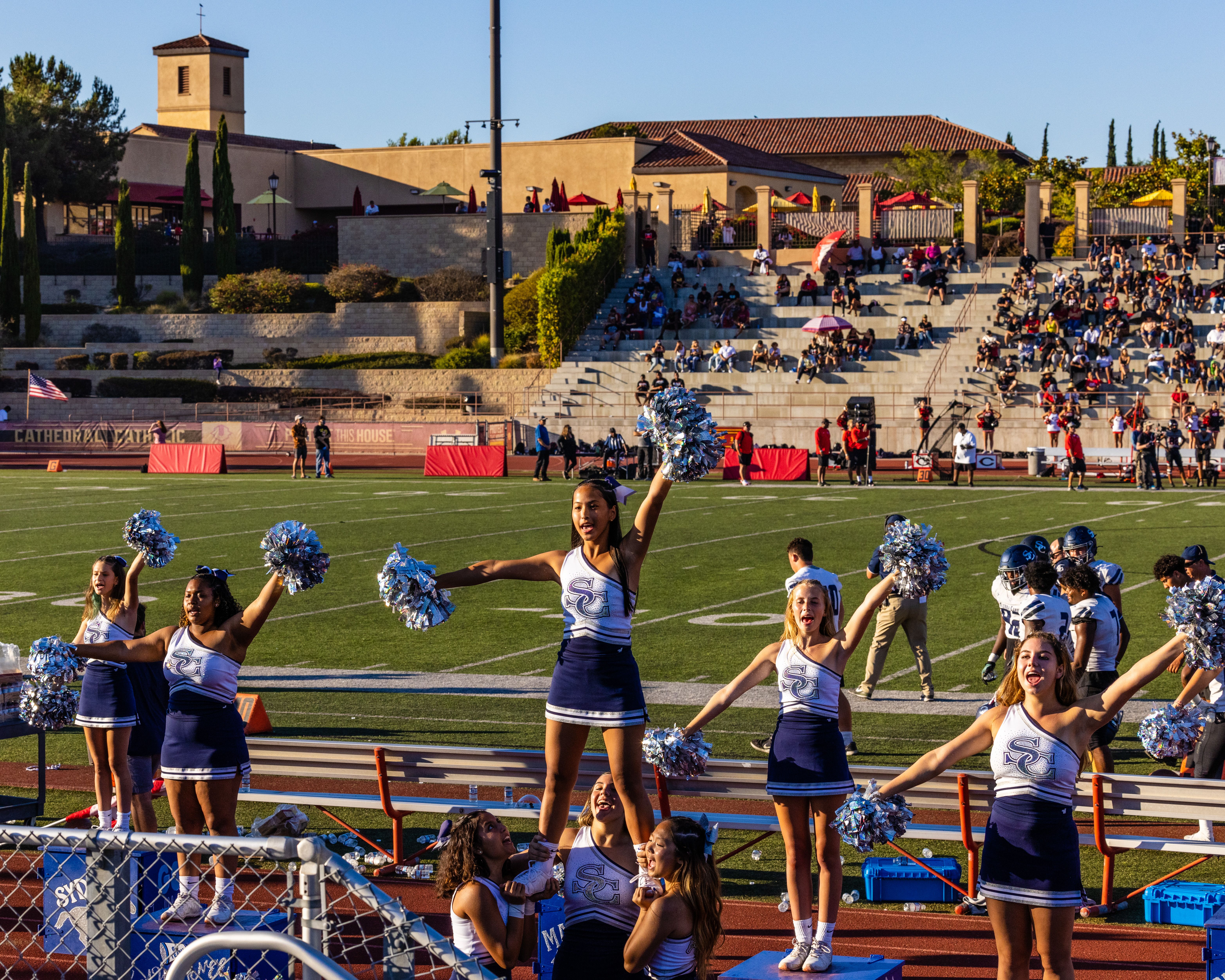 The stadium lights gleaned off the rhinestones of the chic new navy blue uniforms.

A hushed tone of anticipation overtook the crowd.

When a medley of Beyonce songs began to belt out from the stadium speakers, the revamped Sierra Canyon cheerleading squad delivered a visual masterpiece with a jaw-dropping performance featuring sharp dance moves, stunts and formation changes.

It was clear this was not the same old song and dance.

“It was almost like an award show-type of performance. Or like an NBA or NFL halftime show,” Sierra Canyon cheerleading coach Reyna Joy Banks said.

Since Banks took over the cheerleading program in the summer of 2020, the size of the squad has more than tripled from five to 17 girls, and the performances have turned into must-see events.

Banks – a former dancer for Beyonce and Usher among others who has also choreographed for Grammys, BET Awards and Billboard Awards – choreographs a new routine every week for her growing squad.

In addition to the dazzling Beyonce medley, they have had performances that have included The Pussycat Dolls, Britney Spears and The King of the Dead (though the ever-optimistic Banks prefers to call that song The King is Alive).

Banks said this week’s performance – set to a medley of Janet Jackson songs – could potentially be the most magnificent yet.

“The girls look like they are ready to perform for the Super Bowl,” Banks said.

Captain Anabella Bonito, the longest tenured on the squad as a three-year member, said Sierra Canyon cheerleading has become next level.

Bonito said the entire school is taking notice of the drastic and rapid improvements on the squad.

“They are totally with us,” Bonito said. “During one of the beats of the songs if we hit it or stunt well, they are right there cheering with us. It is so much fun and there is a lot more school spirit now.

“We are learning so much from Coach Reyna. We are doing stunts for the first time, and that is a big deal in cheer. And we have a lot of unique and fun choreography.”

Banks put together an extensive tryout process for every potential cheerleader, having them go through their jumps while learning one cheer and one dance on the spot.

There was also a process for selecting the captains that included a sit-down interview with Banks and last year’s outgoing seniors.

Bonito and junior Ashley Ju emerged as the co-captains.

“These two showed the most amazing leadership ability.”

Banks has given Bonito, who dances competitively for Elite Dance Center, opportunities to help with the choreography and to have viable input.

“Anabella is a powerful dancer who has good choreography experience,” Banks said.

Sierra Canyon participated in Cheer Camp in Palm Springs over the summer and won several awards, including Most Spirited on the first night, Best Showmanship and Most Improved. Bonito won Best Toe Touch jump and was a finalist in the Dancing Queen Danceoff.

The cheer squad has also become a fixture for the nationally recognized basketball and football teams, particularly the halftime shows.

“We brought the fire last year, and we’re bringing even more fire this year,” Banks said.

Junior Sophia Dimasiss Krausz also brings a veteran presence to a squad that does not have any seniors.

Banks has a large group of underclassmen.

“I love to watch these girls glow and grow,” Banks said. “They are a breath of fresh air. They are bringing me so much joy. It’s about bringing up and raising these future legends, the next Obama, the next Ellen DeGeneres, the next Jennifer Aniston. It’s great to be part of their future, for them to know who they are, to love themselves and to put in their mind what they can accomplish.”

Solene Flores returned as an assistant coach and has shined in an elevated role, and former Sierra Canyon cheerleader Gianna Marshall has returned to the coaching staff while attending FIDM.

“They have been a big part in what we are doing,” Banks said. “We choreograph the mess out of these songs every week. And we drill it and drill it, like a drill sergeant, but with rainbows, butterflies and cupcakes. It’s a process, but we want to make a powerful moment. We want the audience to be impacted.

“They are going to a whole other level.”