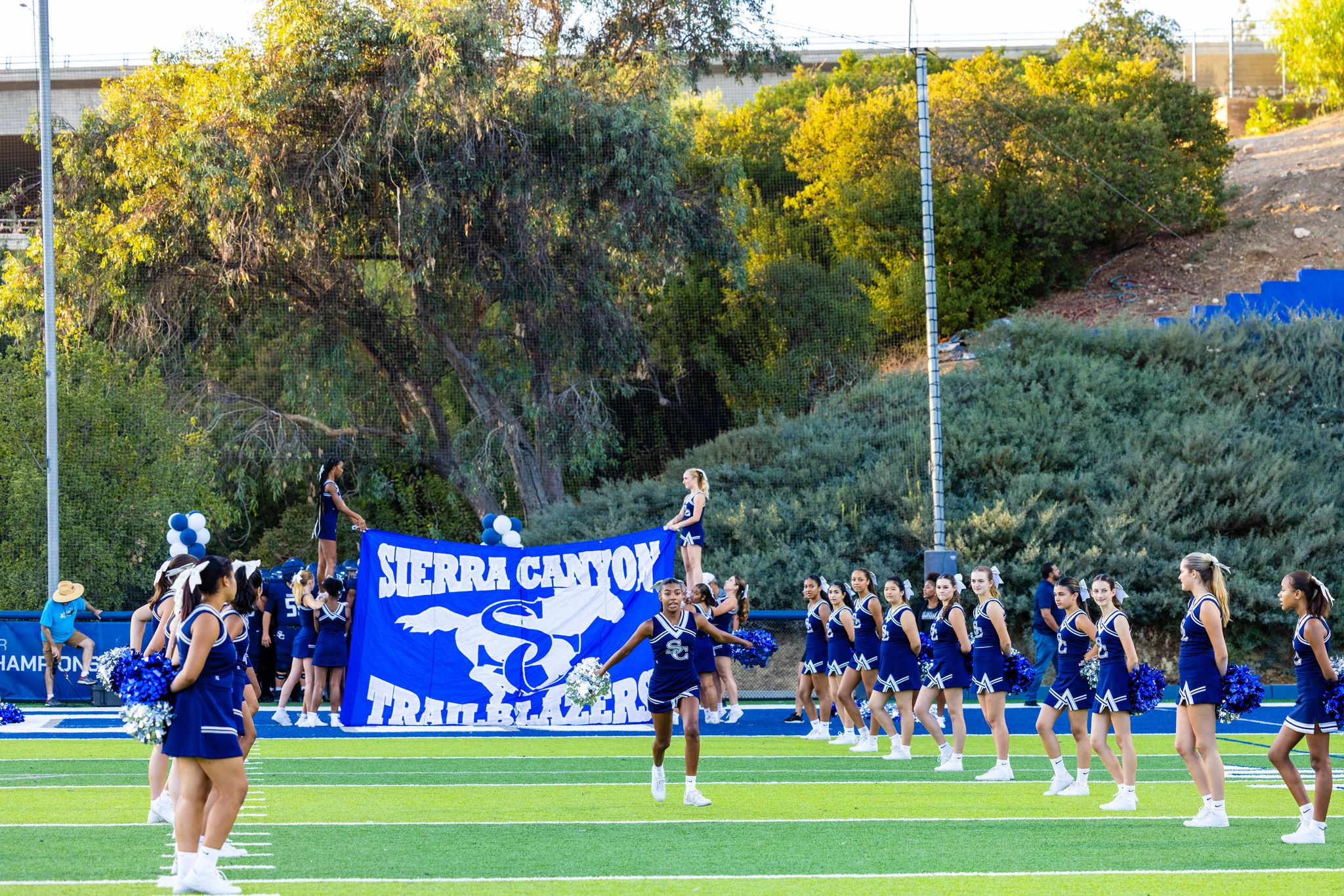 The “Wow” factor was almost instantaneous.

The six basket tosses were flawless, every movement was sharp and clean and all 33 Sierra Canyon cheerleaders moved in perfect unison to Missy Elliott’s “Pep Rally” in a visually stunning 3 minute and 30 second set.

It was an epic halftime performance that christened Sierra Canyon’s new football stadium and set the stage for what should be the first of many dazzling showcases that Coach Reyna Joy Banks is planning.

“It was insane. It was amazing. It was our most impeccable performance yet,” Banks said. “Not a single moment was missed. These girls have worked so hard and they accomplished their goal. It was beautiful.”

Banks, in her third season as cheer coach, has elevated each cheerleader performance into a can’t-miss spectacle for Sierra Canyon football and basketball games.

Banks is bringing her experience as a former backup dancer for the likes of Beyonce and Usher and former choreographer for the Grammys and BET Awards.

Her plans for the homecoming game include the exact choreography she performed with Beyonce, a routine the girls have been working on throughout the summer. Banks is even toying with the idea of adding a drumline for this show.

“This will be our biggest performance yet,” Banks said. “And they look so great doing it too.”

In addition to their halftime performances, Banks is lining up several exciting possibilities for her squad this season.

There is even talk of the Sierra Canyon cheer squad being cast in a movie that needs a full cheer squad.

The team is also planning to perform a tribute to Sean “Diddy” Combs incorporating his new single “Gotta Move On,” this season, especially with his daughters Jessie and D’Lila Combs on the squad.

“He’s excited and honored we are doing one of his songs,” Banks said. “We are planning some big things this year.”

Banks has nearly doubled the size of last year’s squad, making it the largest girls team on campus and the second-biggest squad behind only the football team.

With the help of assistant coaches Solene Flores and Gianna Marshall, the squad is taking on more challenging choreography and adding more tumbles, flips, backflips and other challenging stunts.

“We have been taking it up a notch,” Banks said. “We’ve been training them harder than we have ever trained them before. We had some injuries last year, so we wanted to make the girls stronger and get their legs, arms and mindset in a better place.”

Banks lights up when talking about her squad

Seniors Ashley Ju and Sophia D. Krausz are serving as the official cheer captains. Seniors Annabella Bonito and Hannah Sullivan are the co-captains.

Senior Carly Antoine Dillon is entering her third season on the squad.

Junior Kayla Blatt is one of the new tumblers.

“All of them are so brilliant and so amazing in their own right,” Banks said.

Banks said she usually ends each practice with a positive affirmation.

“Our foundation of love is what sets this squad apart,” Banks said. “This is one team. One squad. Everyone moves as one.

“It’s going to be a great year. We already take up more than half the football field. Imagine basketball when we put 33 girls on that court.”