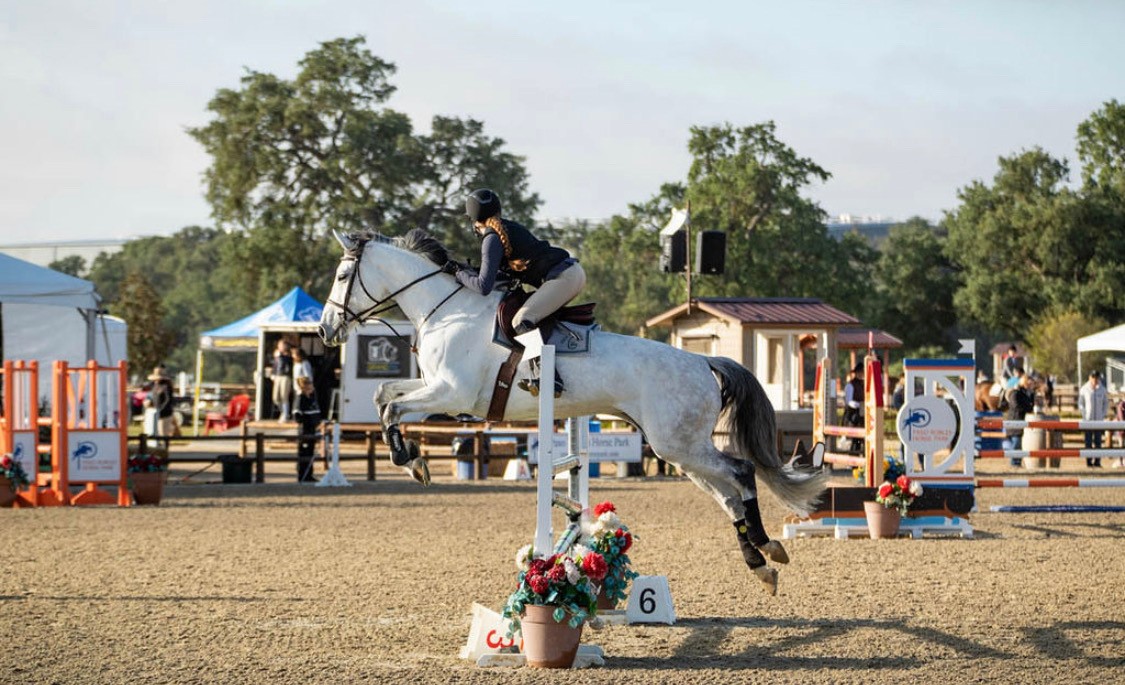 Freshman equestrian Lucy Russell pushed past her own comfort level to compete in new categories.

Together they propelled Sierra Canyon to an impressive fourth-place finish in the Interscholastic Equestrian League out of 71 schools at Hansen Dam for the 2021-22 school year.

Talk about some serious horsepower, especially for a team of just two riders to take on schools with much larger rosters.

“It felt rewarding,” Gerber said. “It was a little stagnant during COVID when there were no shows, so it felt good to be back out there. I felt we had a good chance, especially with Lucy. She’s such a great rider. Russell’s plan was simple: rack up as many points as possible.

With the IEL featuring four different divisions – Jumper, Hunter, Equitation and Dressage – Russell decided to try to take on the gauntlet of competing in all four divisions.

“It was definitely to get experience in different classes, but it was mostly for the points,” Russell said.

Since the IEL scores are based on the culmination of points over three shows, the decision to compete in all four divisions created ample scoring opportunities for Russell.

Russell, the individual Novice champion as a seventh grader, emerged as the JV champion by placing in almost every division over the course of three shows.

Russell emerged with a massive individual trophy and a colorful blue-and-yellow ribbon to add to her growing collection.

“The idea was to do all the classes without tiring the horses,” Russell said. “Even if I didn’t win a division, I was still earning points. We were definitely gunning for the points.”

With her gelding horse Golden Boy (or “GB”), Russell scored points in the Jumper and Hunter division.

The Jumper division is based on timing around an obstacle course. The Hunter division is focused on the horse and how it moves and jumps and features judges.

“I had not ridden GB for that long – just a few months – so it was a good experience to ride a newer horse for me and test those waters,” Russell said. “He was fantastic and had some nice  movements.”

Then Russell expanded her comfort zone with her mare Nellie, garnering points in the Equitation and Dressage divisions despite being relatively new in these divisions.

Equitation focuses on a rider’s position and a rider’s ability to ride smoothly.

Dressage is considered the purest form of horse training where the horse and rider perform a series of pre-determined movements from memory.

“Nellie was very obedient and easy to ride – that’s what helps in a category like Dressage,” Russell said. “It helps to be able to direct your horse the way to go with the smoothness you need.

“Even though I was not familiar with Dressage, I knew my horse and her quirks, and that made it easier for me.”

Russell’s dedication showed when she trained both horses simultaneously leading to the IEL season.

“I was at the barn pretty much every day,” Russell said. “It isn’t a full-service barn. I show up, take them out, clean them off, put their gear on and ride. Sometimes they need a shower or a brush off. If they’re cold, I put blankets on. It was a lot of work, but it was worth it.

“I was very lucky. Both are good horses.” Back in the saddle

For Gerber, it was a bit of redemption.

In June of 2021, Gerber suffered a Stage 4 concussion after a serious fall on her American warmblood horse Angelonia that sidelined her for the next six weeks. It then took her an additional six weeks to build her riding back up.

Luckily Angelonia – or “Annie” to her friends – was relatively unharmed.

“She was fine – just her knee was scraped. But it took me a little while to get back in the saddle and back in shape,” Gerber said. “She’s very special to me. She’s been there since I was young. I trust her. There’s not another horse I trust with my life.”

Despite the three-month hiatus, Gerber produced a quality performance in her first IEL of the season.

Gerber and Annie hit no obstacles on the 3-0 foot JV level and produced a quality time.

“It was a good clean round,” Gerber said. “I was very proud of that show. It was nice to be back and feeling good.”

Gerber has been riding Annie for the past four years. She admitted she was concerned about her connection to Annie toward the end of the IEL season.

Annie put those fears to rest with a resounding final performance of the season, the cleanest and quickest time of the season to help Sierra Canyon produce the fourth-place finish.

“We had been going through a rough patch – I’m not sure if our partnership had gone stale. There were communication issues,” Gerber said. “But she blew it out of the water.

“It was the best she performed in a long time. The light after the storm. It was very rewarding.”

“She is an amazing rider and has done a lot of shows and training,” Russell said. “And she had some really good performances for us.”