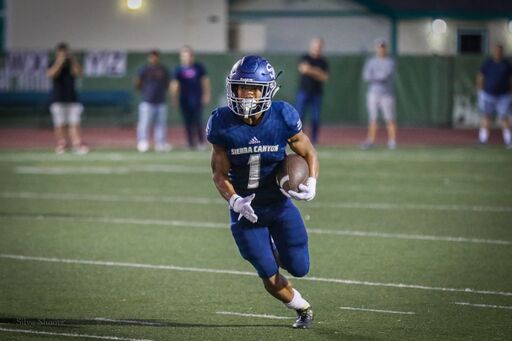 The Trailblazers found themselves down by five points with just over a minute to play and the ball inside the five-yard line.

However, Sierra Canyon couldn’t convert on three opportunities and let one slip away in a 35-30 nonleague setback.

“I am glad and proud of how our guys competed,” Sierra Canyon 12th-year coach Jon Ellinghouse said. “Not thrilled with the execution.”

Sierra Canyon, which was trying to avenge last year’s 25-7 defeat at the hands of Westlake, would not go away quietly after surrendering 21 unanswered points in the second quarter.

E.J. Gable scored two third quarter touchdowns and Hunter Williams pranced in from two yards out. The Trailblazers were within five points with 6:16 remaining and held Westlake to a three-and-out to get the ball back.

Sierra Canyon marched all the way down the field and found itself primed for the winning score. However, it never came to fruition. Westlake made two huge defensive plays in the Trailblazers backfield to take Sierra Canyon nearly out of the red zone.

“We just back ourselves up down there,” Ellinghouse said. We know what we have to work on. “I love our team. It’s a good starting point. We are looking forward to the rest of our schedule.”

Peery finished 16 of 24 for 200 yards and threw one interception. Peery’s favorite receivers were sophomore D.J. Harvey and J.J. Hernandez. Harvey caught four passes for 54 yards and Hernandez had five receptions for 36 yards.

The running game was led by Gable, who finished with 160 yards on 25 carries and the two touchdowns. Hunter Williams added 37 yards on nine carries with an early fourth quarter score and Zach Thannum had a five-yard touchdown run.

Siderman completed 16 of 27 passes for 325 yards and four touchdowns, three to Heller. Heller caught five passes for 205 yards, including scoring grabs of 32, 41 and 88 yards. Heller also rushed for 38 yards on 10 carries with a short five-yard TD run.

Sierra Canyon takes its act on the road at 7 p.m. Friday at Lawndale High, which features dangerous running back Jordan Wilmore.