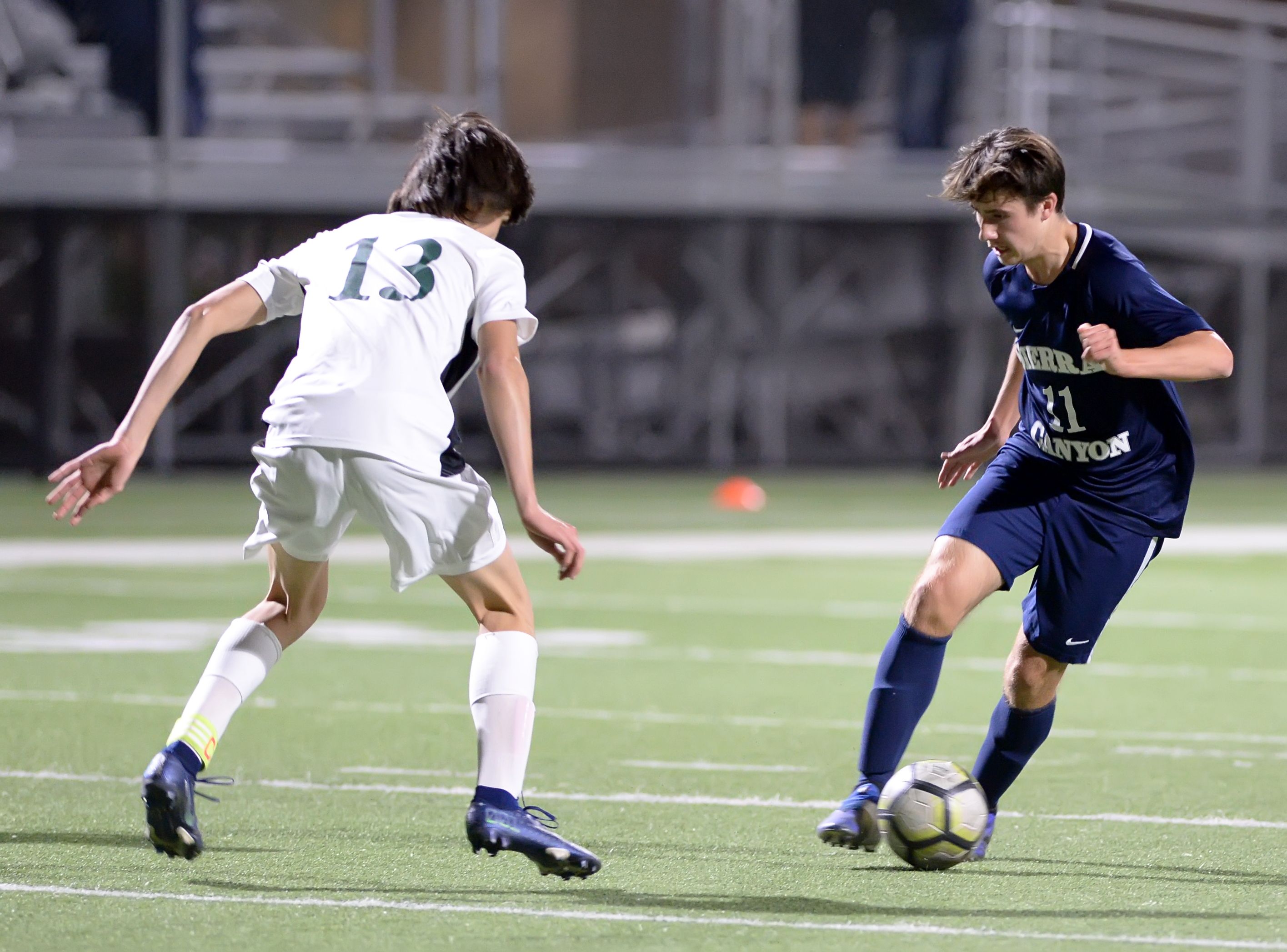 That is the word that comes to Spanish teacher Sergio Ribiero when he thinks of Sierra Canyon sophomore Constantine Theodoratos.

Theodoratos exhibits his dedication on the soccer field with his high skill set and his passion that is contagious for his Sierra Canyon teammates.

His nonstop motor carries into the classroom, where Theodoratos strives to make the most of every opportunity.

“He faces any adversity head-on,” Ribiero said. “That’s what I really like about him and what separates him from other kids. He goes above and beyond what is expected. He doesn’t do it for the grade. He wants to get better and learn.”

The large layoff from the pandemic caused Theodoratos – who boasts a sterling academic reputation – to fall behind in his apprehension of Spanish, particularly some grammar concepts that would be used as building blocks.

Taking Spanish on Zoom was also an adjustment.

Theodoratos sought out Ribiero on his own for extra individualized sessions, wanting to make sure he had a clear understanding of an important subject matter.

“He was super approachable,” Theodoratos said. “He told me if I was willing to put in the work, he would do whatever it takes to help me. It felt right. I am understanding much better now.

“I try to go into everything with a positive mindset. Whatever I’m doing, I try to bring the same energy.”

His 4.5 grade-point average with Advanced Placement and honors courses has him on track to become a doctor or to pursue a sports medicine career.

Theodoratos’ selection as a Sierra Canyon Student First award winner for excellence in and out of the classroom felt natural.

“You don’t get that kind of GPA without working hard in the classroom,” Sierra Canyon boys soccer coach Chris Bonawandt said. “That was my first impression of him and is still my impression: he works hard. Whether it’s a practice or a warmup, he’s always going full energy.”

Theodoratos played on the wing last season as a freshman.

Bonawandt – currently in his first year at Sierra Canyon – wanted to move Theodoratos to center midfielder to maximize his energy.

“My mentality is to control the game,” Theodoratos said. “In the midfield, the game goes through you. You facilitate everything. I try to prevent the other team from getting scoring opportunities and I try to push the ball up and create opportunities for us.

“Usually the ball has to come back to the center of the field. I’m loving this role.”

Theodoratos scored the first two goals of Sierra Canyon’s season to spark a 7-0 victory over a shorthanded St. Genevieve.

A week later, Theodoratos broke a 1-1 stalemate with a a rejuvenated St. Genevieve squad by scoring the decisive goal with 20 minutes left for a thrilling 2-1 victory.

“It was the first time we faced adversity this season,” Theodoratos said. “It came to my feet, I took a touch and I shot it. Everyone went crazy.

“There was still some time left, but it felt like 3 hours instead of 20 minutes.”

Theodoratos has left his mark in the classroom as well and has aspirations of continuing his student-athlete career, potentially at Northwestern, Michigan or Penn State.

Theodoratos made the elite Head of School list from Sierra Canyon in all three middle school years and the Dean’s List last year as a freshman. He has returned to his Head of School pace this year.

In addition to AP World History, Theodoratos has challenged himself with a honors-heavy class load, including Honors Spanish 2, Honors Biology and Algebra 2 last year and Honors Spanish 3, Honors Chemistry and Honors English this year.

“Next year I want to take Art History or a financial class,” Theodoratos said.

Theodoratos is also part of the Chess Club and said he is excited to see what kind of impact he can have in the Human Rights Club now that the pandemic restrictions are loosening.

“I want to be informed of what’s happening in the world and do what I can do to help,” Theodoratos said.

Somehow Theodoratos has carved out time in his schedule to also take on lacrosse, splitting his schedule with school and soccer.

“Coach Mario (Waibel) saw me playing soccer and told me I could be a great addition for lacrosse, and there are a lot of my friends on the team,” Theodoratos said. “I’m having a good time and am still learning the game.

“If there are conflicts in the schedule, I’ve been clear that soccer is my No. 1 priority.”

Soccer is still king for Theodoratos, who was introduced to “the beautiful game” by his father Jason (a former Chatsworth High soccer player) and a long-time family friend Jeff Shoemaker.  His 13-year-old sister Olivia also plays soccer, though his mother Kristine grew up with a volleyball background.

“We all always talk soccer – it’s just a lot of fun. And that’s probably where my love for soccer started,” Theodoratos said.

His favorite is Chelsea, which makes for some interesting debates with Bonawandt, a Manchester United fan.

Theodoratos and his soccer teammates also started an English Premier League fantasy league where each player drafts a virtual roster and competes against each other based on their roster’s stats.

“We’ve really bonded through this,” Theodoratos said. “It’s super competitive, and we always text back and forth.”

The league determined that the last-place owner at the end of the season has to dye their head blonde.

“No one cares about (winning). They’re all concerned about not getting last place,” Theodoratos said, laughing. “But I’m in second place right now, so I’m worried about (winning).”