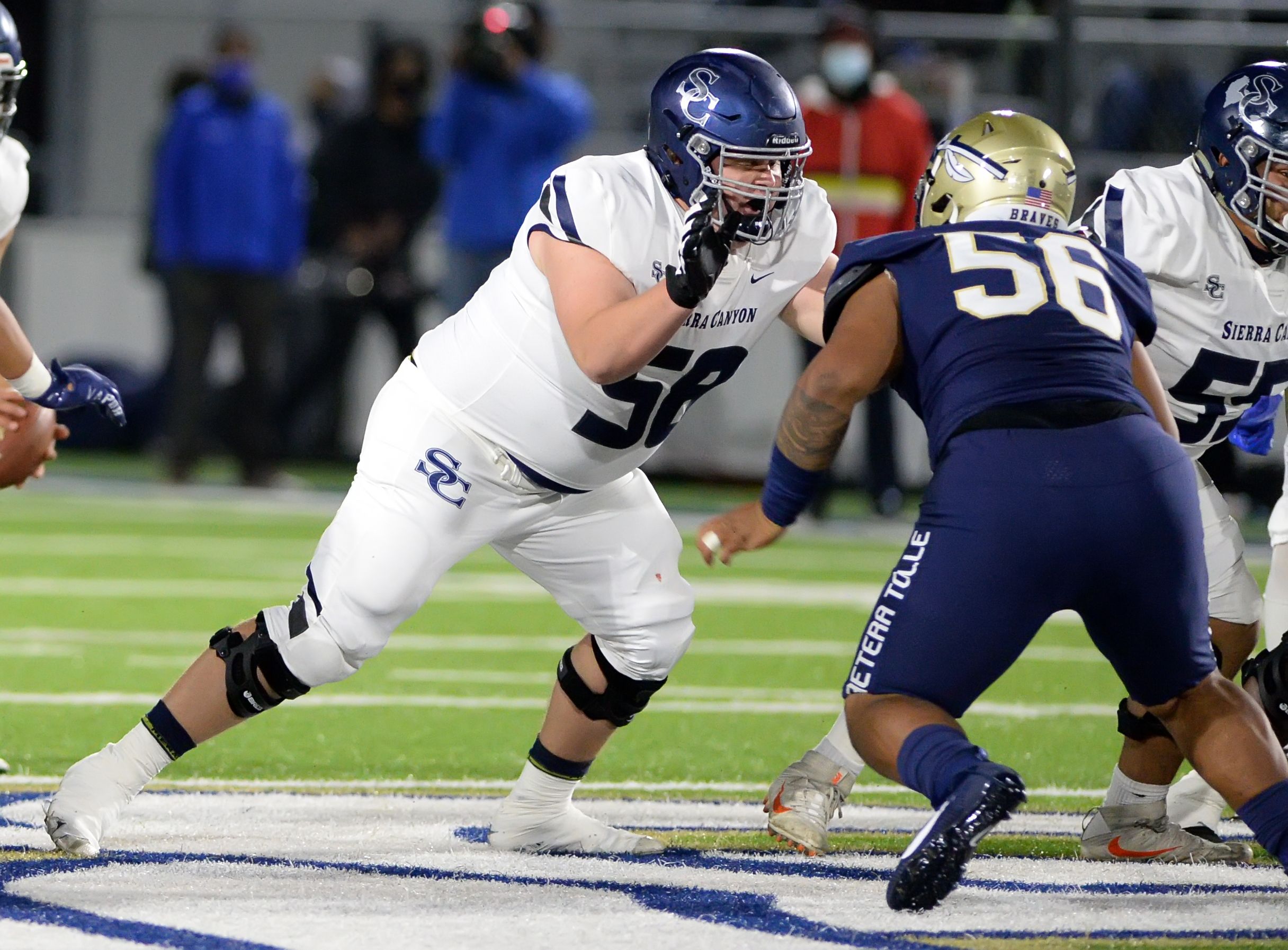 As Gilmore grew, so did the Sierra Canyon football program It was a momentous moment.

As Sierra Canyon lineman Jason Gilmore walked up to St. John Bosco’s sparkling new football stadium in Bellflower to take on the top ranked program in the country, he soaked in the atmosphere and recognized the magnitude of this game for Sierra Canyon.

“It was unreal – almost like a college stadium,” Gilmore said. “People were tailgating in the parking lot. They had giant stands on both sides of the field, a Jumbotron. You could tell it was a big deal.

“I felt a surge of excitement and energy as soon as I walked onto that field.”

At 6-foot-3, 300 pounds, Gilmore is literally the Big Man On Campus, a Sierra Canyon “lifer” who has been at the school since first grade.

Gilmore has witnessed firsthand the metaphoric rise of a football program that began as an 8-man squad in 2007 and is now taking on the No. 1 team in the country in a nationally televised matchup.

“We’ve been taking steps as a program,” Gilmore said. “We beat Calabasas when they had all the big-time dudes when I was a freshman. Beating Valencia the next year was another step. Winning CIF titles and going all the way to state against really good teams the last two years were also big steps.”

Taking on St. John Bosco was like ascending the final staircase of the Burg Khalifa, a completely different stratosphere.

Sierra Canyon scored on the opening possession of the game and trailed by just seven points at halftime before Bosco broke away for a 42-21 opening victory on March 12.

“It was an honor to be on that field. It was an honor to show that we belong with the Boscos, Mater Deis, Servites and other programs like that,” Gilmore said. “We take pride in never backing down. Coach House (Jon Ellinghouse) is going to find the best teams we can play. He believes in us, and I believe in the team.”

Sierra Canyon coach Jon Ellinghouse said Gilmore is a sort of ambassador for the football team and for the school.

“He has seen the entire evolution of the program,” Ellinghouse said. “First, he was a fan and watched us in the beginning. Now he has been part of it for the last four years.

“He’s everything you want as a coach. Smart kid, works hard, does his job and does it well. He’s a fantastic student and he is a great young man in our high school community. He represents us well.”

Gilmore – one of four overall captains – is the ringleader of a behemoth offensive line that might be Sierra Canyon’s best-kept secret on a team of playmakers.

“Jason is the heart and soul of the offensive line,” Ellinghouse said. “One of the things he does well is communicating with the other linemen.

“Against Bosco, we definitely proved we can compete against anyone, and the o-line was definitely a highlight for us. It’s something we can build around.”

Gilmore often can lead by example, as evidenced by his work in the weight room. He can squat 430 pounds, bench 265 pounds and power clean 275 pounds.

Yet Gilmore said he made sure harmony was a top priority and does a great job reaching out to his fellow linemen.

“My focus has been on bringing everyone together,” Gilmore said. “We eat together, we work out together and we bond before games. I try to get as much time together so we can have a relationship off the field too.”
Gilmore maintains a 3.7 grade-point average and said he would like to pursue a career in medicine or personal training.

Gilmore said he has received some Division 3 recruiting interest. However Gilmore applied to Oregon State, Arizona State, Oregon, Arizona and UNLV and said becoming a walk-on “is not off the table.”

“I love football, but football does not need to be the reason why I go to college,” GIlmore said.

“I really like our teachers here,” Gilmore said. “With the small class sizes, we get a personal connection with them. They are not going to push you aside. They will sit down and talk with you about what’s going on. They’re always there to help.”

Gilmore said he relishes the chance to finish out his senior season after it was initially in jeopardy due to the pandemic, ready to take aim at a revitalized St. Bernard squad on Friday (March 19).

One of Gilmore’s best memories came when Sierra Canyon beat Cajon in the CIF final in his sophomore year.

“We needed one more first down to seal it, and they gave the ball to CJ Gable,” Gilmore said. “When he got the first down, you could see me jumping up and down. We all saw it on the video.

A big moment in a jumbo-sized career.