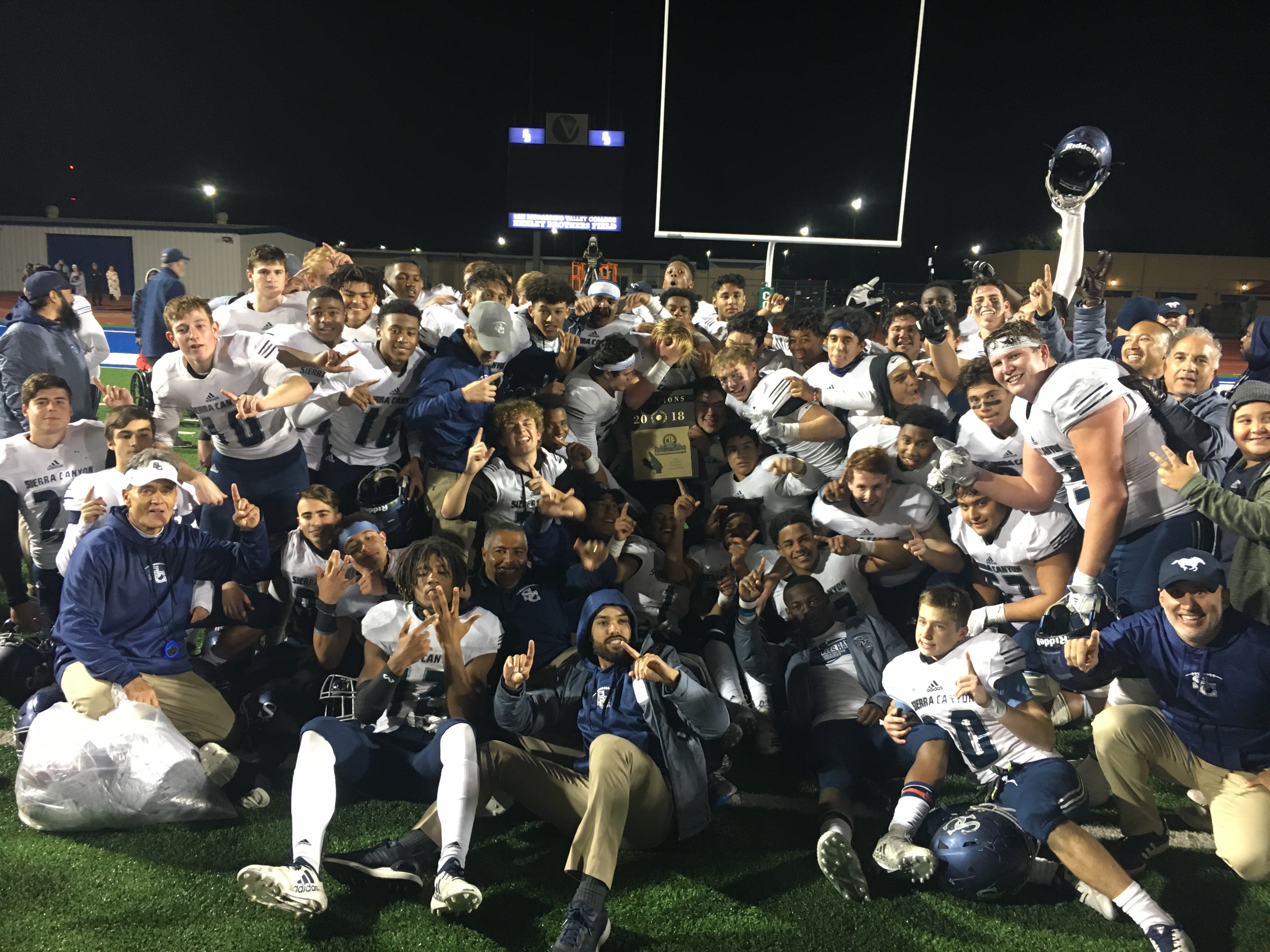 SAN BERNARDINO — The Sierra Canyon football team continued a familiar trend Friday night. The Trailblazers won their third Southern Section championship in the past four years after a wild 34-30 victory against Cajon in the Division 3 championship game at San Bernardino Valley College.

The win gives Sierra Canyon its fourth championship in the past eight years and the program has reached at least the semifinals in seven of the past nine years.

“This feels amazing,” Sierra Canyon tailback E.J. Gable said. “This is the No. 1 thing I’ve ever done in football. I wanted to give my all tonight. I wanted to have the game of my life.

Gable lived up to his goal. The Arleta transfer rushed for 216 yards on 25 carries and scored two touchdowns. Gable’s 11-yard run into the end zone with 8:21 remaining gave Sierra Canyon its winning points after seeing Cajon erase a 17-point deficit and take a 30-27 lead early in the fourth quarter.

Cajon had a chance in Sierra Canyon’s red zone late in the game but Devin Murray’s halfback option pass back to quarterback Jayden Daniels on fourth-and-goal from the eight only got the Cowboys to the three-yard line where Sierra Canyon took over.

The Trailblazers never gave the ball back. Sierra Canyon was able to milk the last four-plus minutes. Chayden Peery, a sophomore quarterback completed a short pass to J.J. Hernandez for a crucial first down, Cajon was flagged for an untimely unsportsmanlike conduct penalty and Gable broke free for a 45-yard run all the way down to the one-yard line. Sierra Canyon (11-3) would run out the clock from there.

“I just knew we were going to win when we stopped them late,” Gable said. “We took care of our business we had to.”

Sierra Canyon led 17-0 and 24-8 before watching Daniels (So. Sec. all-time leader in passing and touchdowns) nearly lead an incredible comeback. Daniels complete 18 of 31 passes for 234 yards and rushed for 174 yards on 25 carries. The top dual-threat signal caller in the country accounted for four touchdowns and was basically a one man wrecking crew.

“We did an incredible job in the first half,” Sierra Canyon coach Jon Ellinghouse said. “But we knew we were playing an opponent that would not quit and a team that could score in the blink of an eye.

Daniels completed a 50-yard pass and then scrambled 35 yards for a touchdown in the third quarter to start the rally. Later, he connected with Utah-bound receiver Darren Jones and Josh Gibson for touchdowns of 21 and three yards, respectively.

The Trailblazers dominated the first half scoring the game’s first 17 points and holding Cajon (12-2) to 145 yards of total offense.

Peery scored on a 1-yard sneak, Hernandez caught a 15-yard touchdown pass and Josh Bryan made one of his two field goals (31 and 35 yards).

“We were really dialed in defensively,” Ellinghouse said. “Even a couple pass interference calls were our guys being right there and being aggressive.”

Sierra Canyon now awaits its regional bowl matchup for next week. The draw will be announced Sunday.