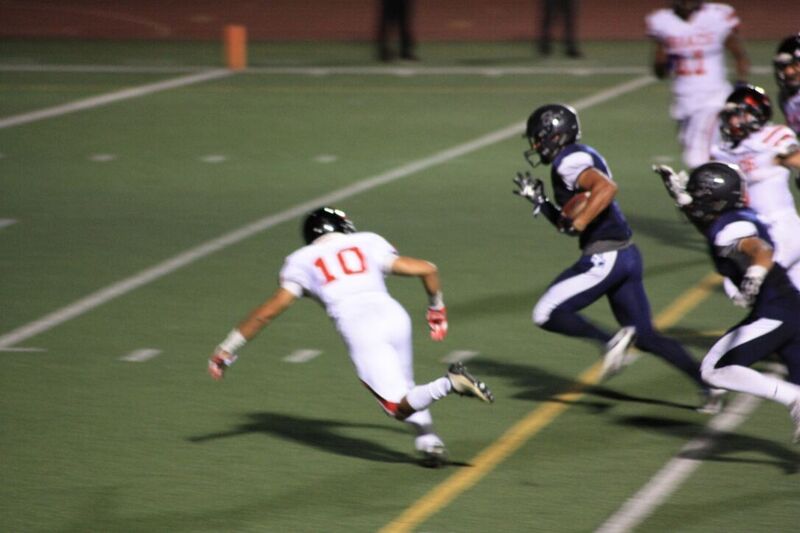 by Alyssa Nunez, “The Standard” After winning league, winning CIF, and reaching the state playoffs last year, the football team is already starting out with a successful non-league record of 5-0-0. The team is coming out stronger than before with their starting seniors who have been varsity starters for the last three years and also new team members.

The team has been practicing all through the summer conditioning including strength conditioning and running conditioning so that when they begin to play for league and CIF they are best prepared.

Already throughout the season, starting quarterback Niko Harris (‘17) is out due to knee injury. Johnny Hawkins (‘19) has been stepping up and playing quarterback for the past three games and has come out with a win each time.

“ My goals are to win a championship and to accomplish I need to become more of a leader,”Ray said.

According to Ray the biggest competition this year is going to be Paso Robles (played on 9/30) and Paraclete who are league rivals. Last year, the team was able to come out with a 48-38 victory.

“We just come in everyday ready to prepare like it’s a championship week and if we keep doing that I’m sure we will see more success,” Ray said.

New player Daniel Kamulai (‘18) is adjusting to both the new football practices and the school itself quickly as the upcoming season is approaching. Both on and off the field, the boys always perform to the best of their abilities.

“Practice has been going really good. I came in not knowing anybody but practice has made me gain a lot of friends. On the other hand, since it’s a new offense and defense, I have been doing a good job learning how to connect with my quarterback when doing routs. School-wise it’s new, but it’s nothing hard to deal with. At my old school things were given to you and no work was put in, but at Sierra I have to work for things which is good because nothing is given to you in life and my learning it now would be good for me in the future,” Kamulai said.

Also new player Neil Lenhoff (‘18) has been very welcomed to the team and is able to start his season on the game against Viewpoint.

“At first I was worried I wouldn’t be able to manage my school work with the amount of school work I put into football. Coach Ellinghouse and the team’s veterans helped me figure out how to get the most out of the time I had available for school. Since Sierra Canyon practices with JV and varsity together, I got to know every kid on the team before the school year started. There is a mentality on the team and we push each other to do our best because we care about the success of the guy next to you,” Lenhoff said.