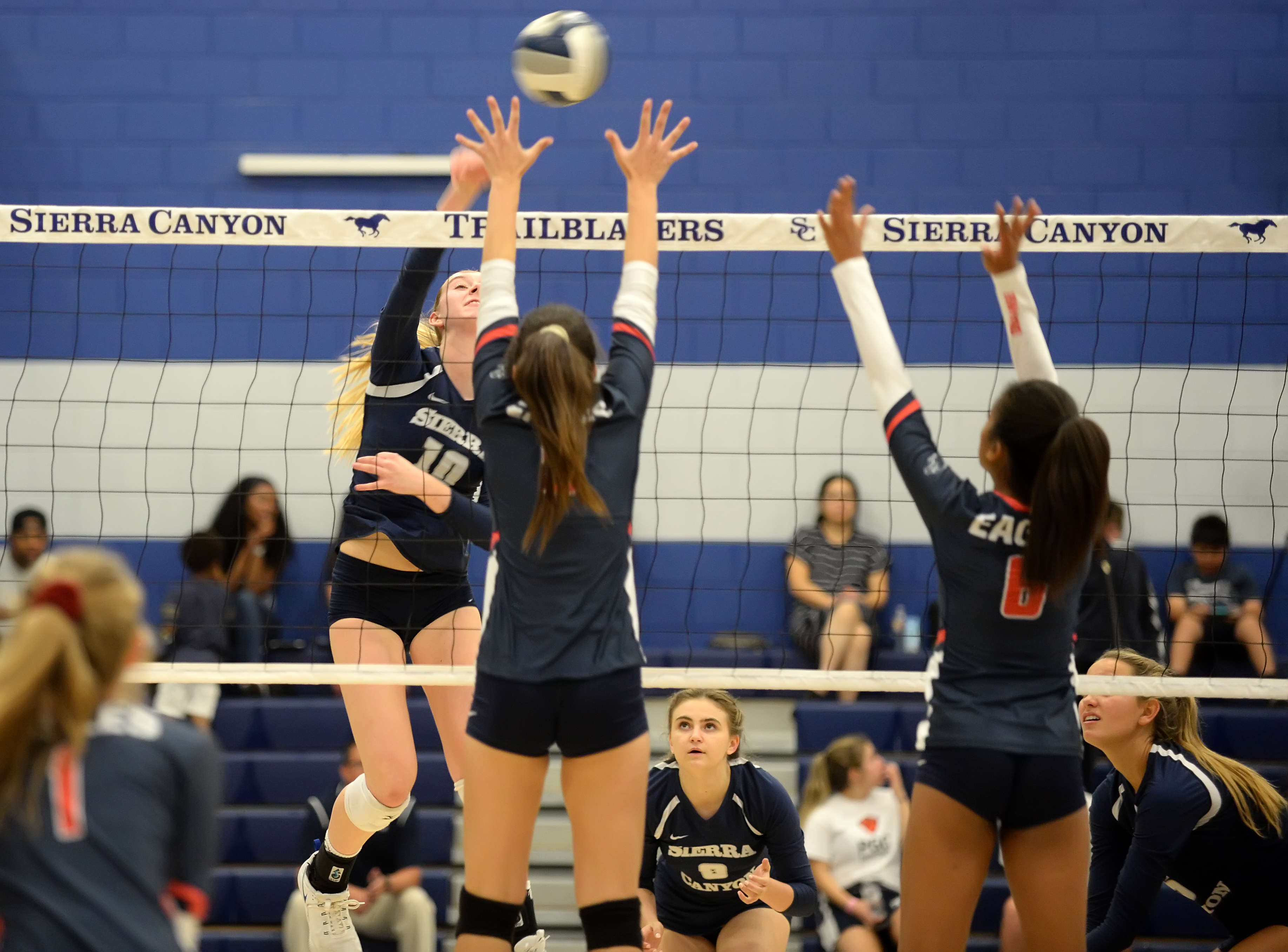 The Sierra Canyon girls volleyball team is testing the waters on how far the program can keep improving. After winning state and Southern Section championships a year ago, the Trailblazers are not slowing down.

“It’s been an amazing year, it could even get more amazing,” Sierra Canyon coach Stefanie Wigfall said. “We have to continue to get better and stay hungry and stay together.”

This past weekend elevated the program to uncharted territory this week in the section Top 10 polls and set up an incredible senior night presentation before a 13, 24, 9 sweep against Windward.

The Trailblazers took down Palm Desert, St. Mary’s of Stockton and Cathedral Catholic of San Diego (19-25, 25-21, 15-13), a program ranked in the many national Top 10 polls. After winning its pool Friday in the California Challenge tournament in San Diego, Sierra Canyon knocked off La Jolla Country Day (12, 19) and La Costa Canyon to reach the semifinals. Sierra Canyon then lost to Walton of Georgia, a team that started the year ranked No. 1 in the nation.

Yale-bound Zoie Stewart, junior Jaylen Jordan and Michigan-bound May Pertofsky had 11, nine and seven kills, respectively to lead Sierra Canyon. Pertofsky and Jordan were named to the all-tournament team.

The weekend showing moved Sierra Canyon to No. 4 in the combined Div. 1/Div. 2 poll all but assuring the Trailblazers will be competing at the section’s highest level come playoff time.

Senior night was a total success with another league sweep to give Sierra Canyon its 44th consecutive match victory and increased its sets won in a row in league to a whopping 106.

Pertofsky, Stewart and Jordan Pillsbury were honored in a nearly 30-minute pregame tribute, which included a very nice five minute video board presentation.

“It’s an end of an era,” Pertofsky said. “Being a senior is insane. I am going to miss everybody so much. But I can’t wait for the future. This place has prepared me.”

“I have been here for 13 years,” Stewart said. “I helped improve the team and the program. I love this team so much.”

“This is a culmination of all our hard work,” Pillsbury said. “I’ve seen this three times but never been a part of it. This means a lot. I am excited about the future but Sierra Canyon will always be home.”

Wigfall wrapped it all up perfectly.

“This was the perfect storm,” Wigfall said. “The three of them stuck and stayed together. They are all at ease playing on the court together. They have so much synergy. It’s more than just the volleyball. The impact I had on them helping them improve and realize their dreams. And their impact in me is priceless. They are an inspiration to me.”

The team hosts Crossroads on Thursday before finishing the regular season next week at Campbell Hall and Paraclete. The team will then be in the playoffs to embark on a journey in Div. 1 never before done in school history.