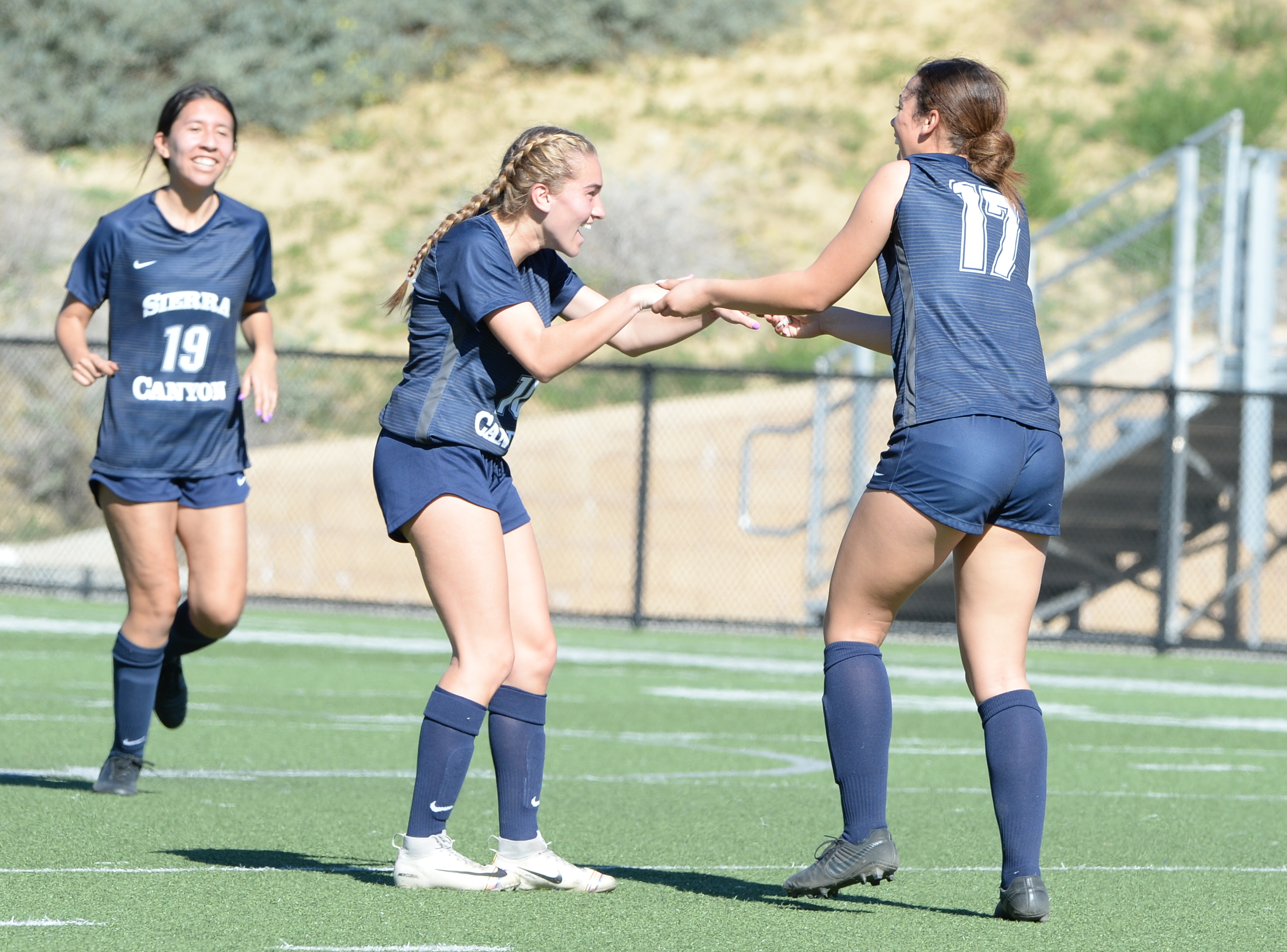 Sierra Canyon coach Kristi Walker unleashed a second-half lineup in the girls soccer season opener against Paraclete in which all four of her goalkeepers by trade were on the pitch.

They might not all have been wearing their multi-colored jerseys, but it was a sight to behold.

“It was crazy – I can’t remember anything like that,” Walker said.

Olivia Babcock was at the net, and Walker dispatched Lolo Retsky, Audri Klionsky and Isabella Marzan up front to try to spark the offense in a 1-0 nonleague win at Paraclete on March 23.

Sierra Canyon is a perennial girls soccer contender with two CIF Southern Section titles and two Southern California Regional crowns, yet had just 13 players available for its opener, including all four goalkeepers.

Creativity and flexibility will be key in this pandemic-shortened season, and Walker praised her eager keepers.

“This showed me a lot about this team’s character,” Walker said. “It’s not easy to have four goalkeepers on a roster. And not all of them are going to play goalkeeper.

“But they have all been great and had amazing attitudes. This is not an excuse-making team.”

USC-bound Morgan Brown has the starpower and experience to help shoulder some of the burden left by the graduations of Jazy Coleman (Oregon State) and Tatum Solis (Cal State Fullerton).

Senior center back Bella Fisher will also provide some valuable insight as just one of two seniors on the squad.

“We have a great group of girls who are working extremely hard,” Walker said. “And we’ve had some juniors stepping up as leaders as well.”

Brown is an elite center back, but has moved to an attacking midfielder/forward role in an effort to create more scoring opportunities for Sierra Canyon.

It is for the good of the team and for the love of the sport.

“This is totally different for her this year because she has been a defender her whole life,” Walker said. “This gives her the challenge to be something different. It gives her an opportunity to learn about herself and to get better in the field.

“She is very athletic, reads the game well, is calm and steady, a great tackler and great in the air. Just a big presence.”

It will help offset the losses of Alyssa Abulaf (tennis), Ella Calderon (tennis) and Maddy Debs (softball), multi-sport athletes who were forced to focus on one sport due to the unique circumstances surrounding the return of high school sports from the pandemic.

“This team is so coachable,” Walker said. “They are hungry to learn and improve.”

Balbin delivered the poignant moment of the opener by blasting an impressive goal in the second half to overcome Paraclete.

Sierra Canyon has just six more matches scheduled during this pandemic-shortened season, including Brentwood on April 13, Paraclete again on April 21, Viewpoint on April 27, Windward on April 29, Crossroads on May 4 and Windward on May 6.

“No one is sure what is going to happen this year,” Walker said. “I’m just proud of this group and how they have handled this whole thing. They have shown up with smiles on their faces, they’re excited and they want to get better. You can see the resilience in them.

“I’m grateful to be part of this group. They inspire me every day.”