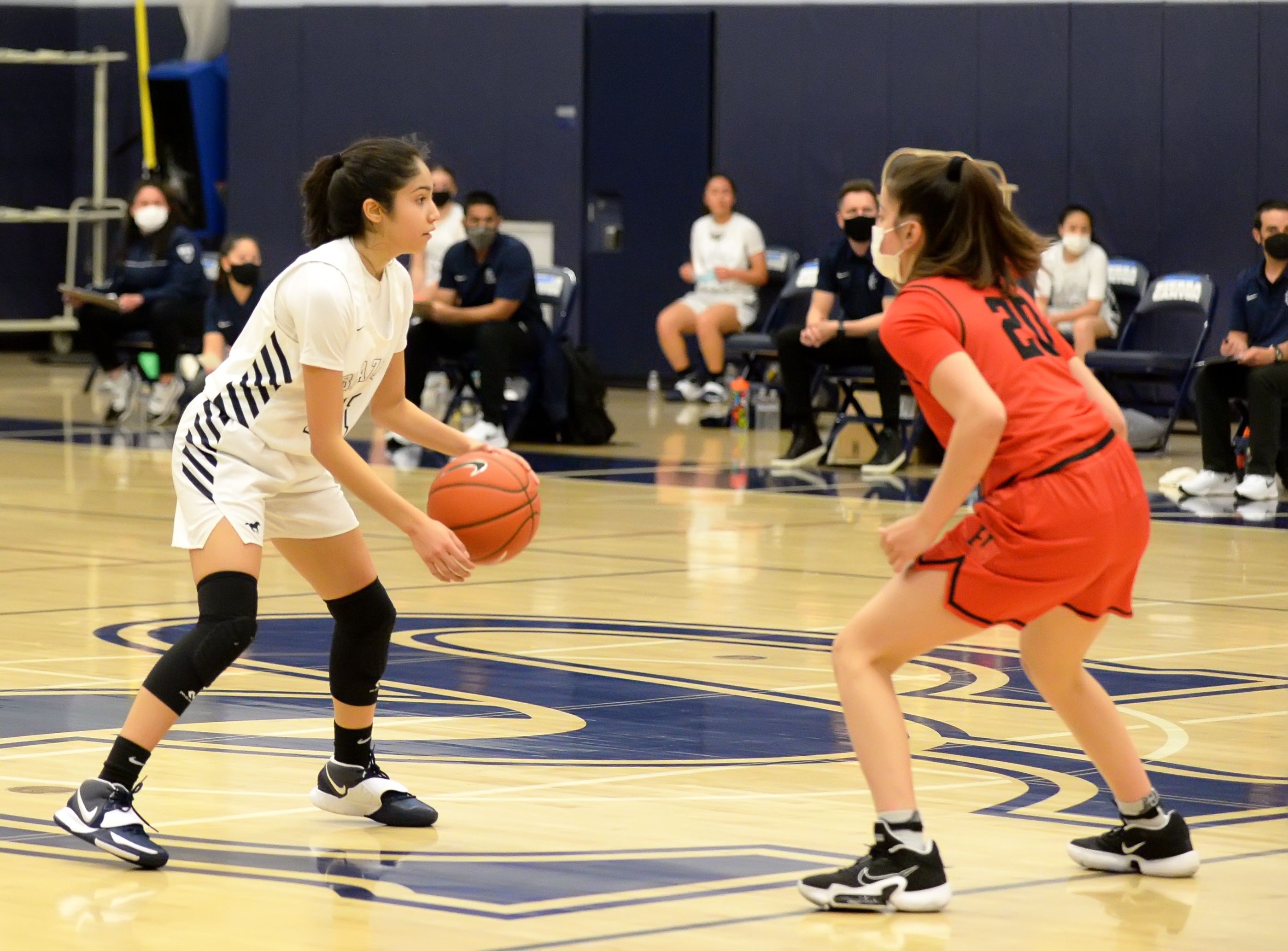 #studentfirst Sofia Ruelas, success in the classroom and on the court

It was loud. It was disconcerting. Playing in a top-tier national tournament at Duncanville High School’s sparkling 2,000-seat capacity gymnasium in Texas last season as a freshman was something Ruelas had never experienced in her career.

“I had really only played in front of our parents before in travel ball,” Ruelas said. “It was a little nerve-wracking. It was only my second game of high school.”

Her next game was at American Airlines Arena, the home of the NBA’s Dallas Mavericks with a capacity of 19,200.

It was Duncanville times 10.

“Oh my gosh, there were so many people. It was crazy,” Ruelas said. “Sitting in the stands watching the game before us, that made me more nervous.”

However once the games started, Ruelas displayed a poise and calmness beyond her years.

Ruelas established herself for a standout freshman campaign on a talent-laden senior squad and showed she is ready to lead Sierra Canyon’s perennial powerhouse girls basketball program into the next great era.

“She is always so poised in big-stage games,” Sierra Canyon coach Alicia Komaki said. “She understands the game really well. She plays at a very calming pace and has a calming presence on the court.

“Just those two games alone in Duncanville and Dallas, you look at those moments and I knew what the future holds for her.”

With a 4.6 grade-point average and her steady heady play on the court, Ruelas emerged as an ideal recipient for Sierra Canyon’s prestigious Student First award that recognizes outstanding work in and out of the classroom.

Like on the basketball court, Ruelas exudes a quiet confidence in the classroom.

“I know when she raises her hand to contribute something to the class discussion, she will have something insightful to say,” Sierra Canyon English teacher Mikael Romano said. “She’s comfortable with very difficult literature like Shakespeare, Jane Eyre or Mary Shelley. She understands insight, subtext and nuance.

“In terms of her papers, it is thorough and a cohesive thought process. She’s very lucid and is not afraid to grapple with tough ideas.”

Ruelas said she was able to relax in the big arenas by focusing on smaller details of the game and adjusting to the sightlines.

Playing in those large arenas, Ruelas said listened to her seasoned senior teammates who had experienced these marquee matchups. She was able to block out the crowd noise and adjust to the different sightlines.

“I surprised myself by staying composed,” Ruelas said. “When I focused on the smaller details, I was able to forget about how many people there were. And my teammates really helped a lot. They told me what to expect and how to handle myself.”

Sierra Canyon – with this strong core of seniors – went 25-7 last season and competed in the Open Division in the CIF Southern Section and Southern California Regional playoffs last season.

“They really helped me both on the court and with their advice,” Ruelas said. “They always said to work hard and to go for everything you want instead of waiting for things to be handed to you. Playing against them in practice and watching how they played and approached basketball really helped me too.”

Ruelas might not produce the gaudy stats, but her value comes from her ballhandling, potent perimeter shooting and creating for her teammates.

The kind of player who can elevate an entire program.

“She’s such a smart player,” Komaki said. “She can shoot the ball well, make good decisions on offense and I like her defensive tenacity.

“She’s very reserved overall, but she has a great sense of humor when you get to know her, and she’s very sweet.”

In addition to being a standout basketball player and student, Ruelas also enjoys playing the violin, starting in sixth grade at Hale Middle School in West Hills.

“We were supposed to choose between an instrument or chorus, and I wasn’t a singer-type,” Ruelas said, laughing. “It was a big decision to choose.”

Ruelas participates in Rock Band at Sierra Canyon as part of the instrumental ensemble. She has performed in several school concerts.

Just like the basketball court, Ruelas was cool and composed.

“We had one performance at school, and I was proud of how we went from sheet music in orchestra to the other instruments,” Ruelas said. “It was me and one other violin. For me to listen and play and be able to listen to the other adjustments, I was really proud of that performance. We played three or four songs, and to go from song to song was really good.”

Ruelas has participated in the Human Rights Club previously and is currently part of the Finance Club.

Ruelas is just beginning her college selection process and is planning on taking a college visit trip to several schools in Oregon this summer. She is also eyeing schools like Columbia University potentially.

Ruelas said she is aspiring to become a dermatologist.

“Skin care has been something that has been important to me,” Ruelas said. “I have a morning routine and a night routine.

“I just remember when I had a minor breakout and I was given a cream and it went away. I realize that one product can make a big difference in a person’s life.”

Her parents Javier and Jessica both hail from Jalisco, Mexico, though did not meet until they were in California. Ruelas said she appreciates her family and is thankful to visit relatives in Jalisco at least once a year.

“It’s good to see a different environment,” Ruelas said. “I always heard stories from my parents and what they went through, and I am grateful for the opportunities that I have.”