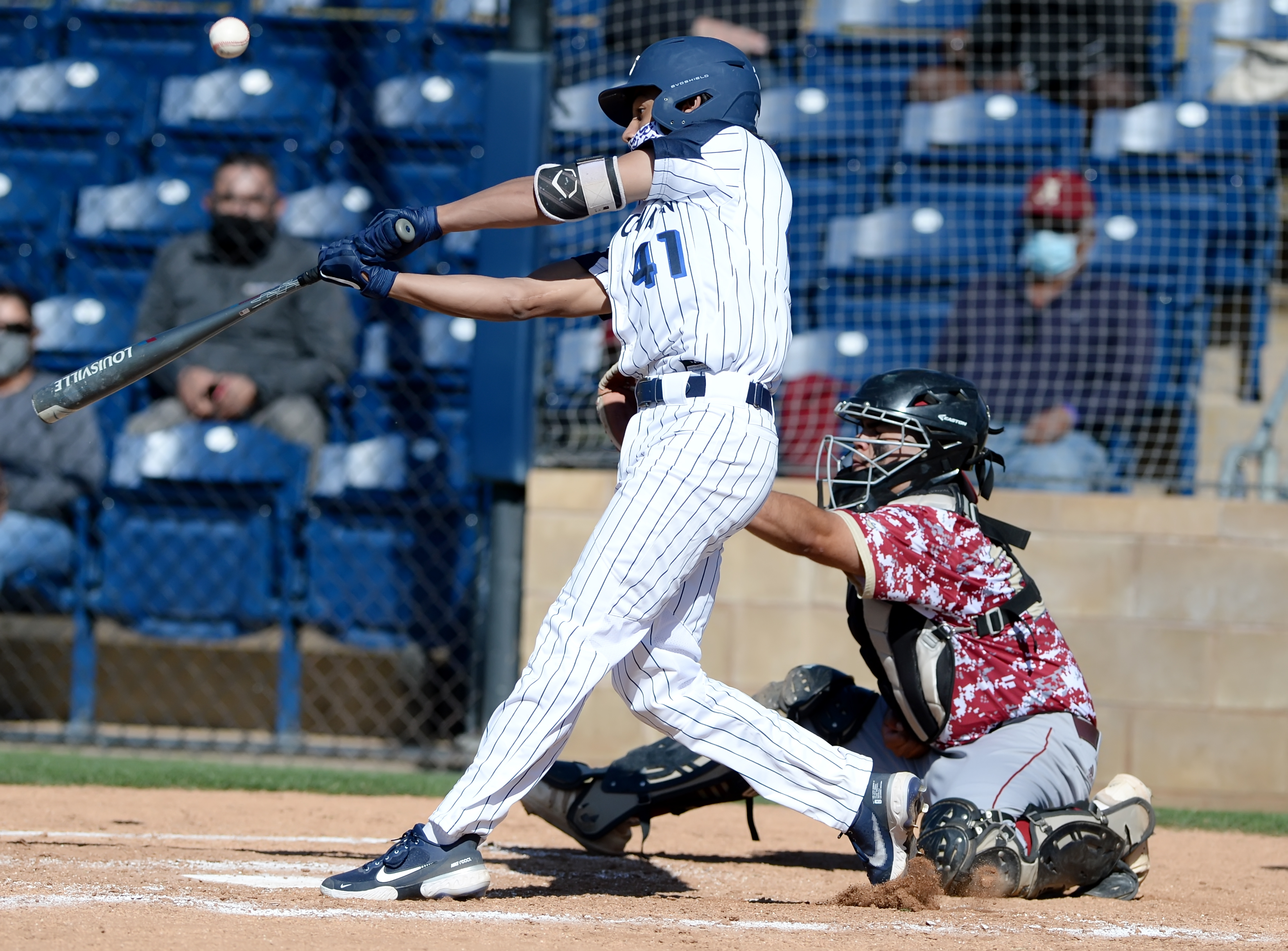 The assignment in Matt Armstrong’s English class was poignant and telling.

Write a letter to someone in your life and offer some advice, much like Ta-Nehisi Coates did to his son in his book “Between the World and Me.”

“It wasn’t anything too deep,” Slipock said. “The spirit of my letter was not to make everything so intense and not take everything super seriously in high school. To have fun.”

Yet Slipock’s letter was layered with profound sophistication and understanding from someone with valuable firsthand knowledge.

Slipock has been on the fast track in the classroom with an astounding 4.7 grade-point average.

Yet despite his elite speed on the baseball field, Slipock did not immediately find his stride for Sierra Canyon’s top-tier baseball team.

After two years on the junior varsity squad, Slipock found himself in a strict platoon in his first year on the varsity team last season as Sierra Canyon elected to use a designated hitter in his place at the plate in his pandemic-shortened junior campaign.

“I was putting so much pressure on myself and was pushing myself too hard, and I was struggling on the field,” Slipock said. “During the quarantine, I took some time to reflect and I decided I needed to go out and play the game and make sure it was fun.

“Last year was disappointing for me, and I said I can either sit here and dwell on it or work to get on the field this year. And that’s what I did.”

This mentality shift has helped Slipock establish himself as the starting center fielder and leadoff hitter in his senior season for a Sierra Canyon baseball team that is legitimately a top-10 team in Southern California.

His brains and athleticism helped Slipock earn a scholarship to play baseball at the University of Chicago.

Ultimately Slipock was a runaway choice for Sierra Canyon’s Student First award that honors excellence in and out of the classroom.

“This guy has an aptitude that I didn’t see in a lot of Major League ballplayers,” said Sierra Canyon baseball coach Jerry Royster, a former Major League player and manager. “Just watching him grow as a student and a baseball player the last four years has been a bright spot.

“Jackson is the kind of player that when given a goal or an objective, he works to get it done. Like some Major Leaguers, if you give him something that works for them, he runs with it.”

Slipock has the game-changing speed to make a spectacular diving catch in the gap like he did on a big stage against perennial power Bishop Amat or to escape a rundown like he did in a playoff game at Damien High School in his sophomore year as a JV call-up in the playoffs.

There was even one performance this season where Slipock homered, laid down a bunt single, stole a base and made a highlight-reel catch – all in the same game.

“You don’t get to see that out of a lot of high school baseball players,” Royster said. “And I think he’s only tapped into a small portion of what he’s capable of being.

“You won’t see him on the internet gloating about a home run. Jackson is about ‘Coach, what do you need me to do next?’ And if he can’t do it, he’s going to ask how he can do it and get better.”

Speed is Slipock’s most viable asset, as proven with his 18 stolen bases on 19 attempts.

“And we have video proof that on the 19th attempt, he was actually safe,” Royster said, laughing.

Slipock’s defense has been a boon to a Sierra Canyon team that has produced an 18-3 record amid a challenging schedule and is tied for first place with Paraclete in the Gold Coast League.

The highlight-reel catches are apparent. But Slipock also makes the necessary routine plays with his positioning and his in-game reads and is quick to build up his teammates.

“I have a decent arm, but it’s not like (Jaden) Noot or Kassius (Thomas),” Slipock said. “And I really don’t get much activity in the outfield with the pitchers we have because they are so dominant.

“We’ve really been picking it up recently. Come playoff time, we are going to be peaking.”

Slipock’s mother Rehani has been a long-time elementary school teacher at Sierra Canyon, and Slipock is a so-called Sierra Canyon “lifer” who has been at the school since pre-kindergarten.

“He’s quiet, and he’s not a big talker in the classroom, but he’s present, and that’s a big deal for someone his age,” said Armstrong, his English teacher. “You can really tell that he’s engaged, even if he’s not talking. He’s looking at me. He has his eyes on me the whole time, here in the moment and interested.

“It sounds like a little thing, but it’s not.”

Slipock is not afraid to be whimsical, as shown by his poem about chicken pot pies and broccoli.

“We were supposed to be imitating a famous poem, and I figured it would be funny if it was random and weird,” Slipock said.

Slipock said he leans more toward math and science as his personal preference, but Armstrong said Slipock’s writing is well-developed and clear.

“Maybe his ‘math head’ helps in more of the formulaic way of writing, but Jackson has good ideas and is able to articulate them really well,” Armstrong said. “He thinks about what he writes, and it reads like it matters.

“You can see his sense of humor more and more. He’s wry and dry, which should surprise no one. He always has great things to say when he does speak.”

Slipock said he has dabbled in photography in his free time and has bonded with his grandfather Reggie through this activity. Reggie also enjoys photographing Slipock during his games.

“I like shooting landscapes, nature and wildlife, and I also shoot random stuff that I play around with in Photoshop,” Slipock said. “My grandfather likes to shoot nature. Once every two weeks or so, we come together to compare notes.”

Slipock said he does not know what his major is going to be at the University of Chicago and is keeping his mind open to different career possibilities.

“It’s probably going to be engineering or economics,” Slipock said. ““I want to see how the first year goes and see what I like or don’t like.

“And that’s why I liked the University of Chicago. It has an open curriculum, so it gives me a chance to try different things. And I have been in the Valley my whole life, so I am excited to go to a different city, somewhere I have never been before.”

Armstrong said he likes how Slipock is taking his next step at his own speed.

“Jackson has the capabilities to do anything he wants,” Armstrong said. “I’m actually glad to hear he doesn’t know what he wants to do yet. I think too many kids feel they need to know what they are doing now.

“Jackson operates on a different level. His motor runs different.  And that’s refreshing.”