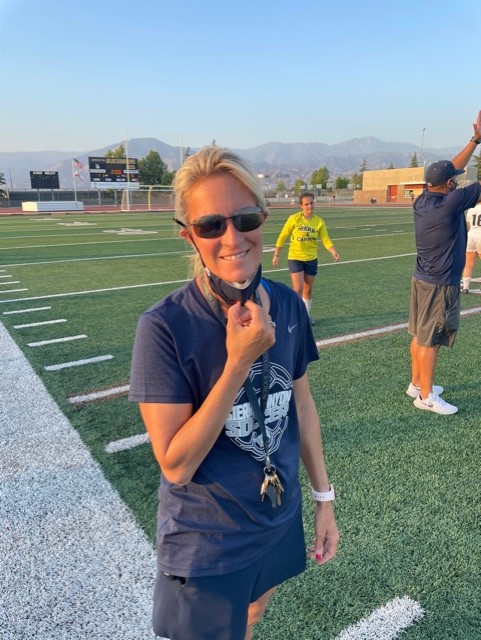 Sierra Canyon is losing one of its iconic coaches.

“It’s a career move for me,” Walker said. “I’m grateful for my time at Sierra Canyon. It’s been an incredible nine years.

“I’m from Bakersfield, born and raised, and I still have family there, so it feels like I am going home.”

Walker turned Sierra Canyon into a girls soccer superpower with a scintillating 144-29-17 record for an .803 winning percentage.

In addition to winning the Gold Coast League title in seven of her nine seasons, Walker also guided Sierra Canyon to CIF Southern Section and Southern California Regional crowns in 2015 and 2017.

“As with all my coaches that I hire, I say, ‘make me look smart,’ and she has,” Pillsbury said. “Not only has Kristy built the best team in the Gold Coast League, but she has hung some banners with some Regional championships.

“More importantly, she has been a great role model to many girls here at Sierra Canyon. She will be hard to replace, but we wish her luck in her new venture.”

Her teams also developed a reputation for cohesiveness and harmony.

“I wanted to create an environment where the kids felt this was their family,” Walker said. “Somewhere where they could be themselves and feel they have a team of sisters behind them. I wanted them to feel as if they could just go and compete and be the best players they can be.

“I’m very grateful for all the players I have coached. All of them have touched my life in some way – all of them.”

Walker said the 2015 season was when Sierra Canyon reached a new level, going 26-4-1 while steamrolling through the Southern Section playoffs.

It then prevailed in an epic 1-0 battle with Grace Brethren in the Regional final at Sierra Canyon on Makenna Gandara’s goal in the final seconds.

“That year was a turning point,” Walker said. “Those were some good days. We had a great team.”

Walker was a soccer standout at Bakersfield High who played collegiately at Westmont College in Santa Barbara. In addition to coaching Sierra Canyon, Walker coached five years for the Real So Cal Soccer Club and the previous three seasons for the Eagles Soccer Club.

Walker said she and her husband Todd Kobayashi are excited to begin the next chapter in their lives and said she hopes to continue coaching at both the high school and club levels in Bakersfield.

“I want to thank Sierra Canyon for everything it has done in my career,” Walker said. “I’m grateful to Rock Pillsbury and (Head of School) Jim Skrumbis for trusting me and giving me an opportunity to work at a school like Sierra Canyon and for the growth, the friendships, the learning experiences and all that came in-between. I’m very grateful for Sierra Canyon.”