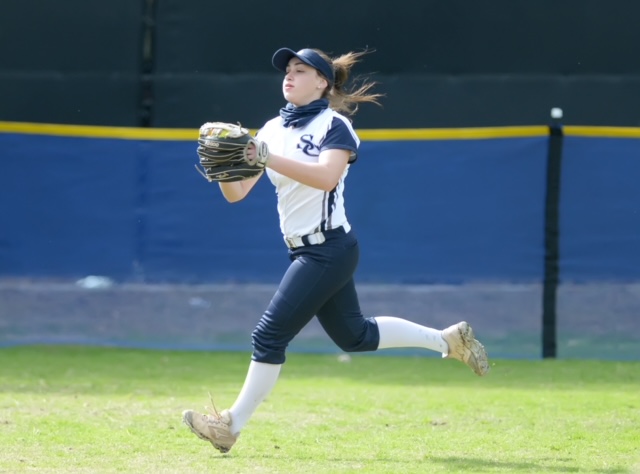 In the midst of the hustle and bustle of her parents’ family law practice, Schneider crafted several short stories, tapping into the creative juices that have made her one of Sierra Canyon’s most dynamic students.

“I’ve known I have wanted to be a writer. That’s what I’ve been drawn to,” said Schneider, now a junior.

Schneider, an aspiring screenwriter, might have some undiscovered gems in the depths of her hard drive.

Schneider said she wrote about 20 short stories during her trips to B3 Law, many involving Greek mythology in the vein of her favorite series of the time, Percy Jackson and the Olympians.

“I don’t think I completed any of them,” Schneider said, laughing. “I would spend a month on one, then move on to the next one.”

Look out David E. Kelley – Schneider has the basis to be the next great legal screenwriter of her time.

Schneider already has amassed a wealth of real-life experience that could potentially benefit her screenwriting career.

Not only does she have a hoard of Ivy League schools already pursuing her for her academic and softball prowess, Schneider has founded her own charity, has worked with underprivileged children in a reading program, is a sanctioned youth umpire and has established herself as an accomplished student.

Schneider emerged as a clear candidate for Sierra Canyon’s Student First award that recognizes achievement both in and out of the classroom.

“She’s a scholar,” said Sierra Canyon teacher Danielle Domzalski, who has had Schneider in Honors English, Honors Colloquium and Honors Research classes. “I’m impressed by the maturity of her intellect and the way she works. She seeks advice, takes constructive criticism and runs with it. She really is a pleasure to teach.”

Schneider is the center fielder and left-handed No. 2 hitter for a Sierra Canyon softball team that has roared to an 11-1 start this season. She is also a standout on the So Cal Choppers travel team.

Schneider earned All-Gold Coast League second-team honors as a freshman before the pandemic wiped out her sophomore season. This year, Schneider is batting over .300 and has played superlative defense.

“She is the first junior captain I have ever had, and that should tell you something about her right there,” Sierra Canyon softball coach Regina Jorgensen said. “She always has that attitude, ‘Coach, what do you need me to do?’ Her skill, her leadership, her communication, her integrity – she leads by example.

“When her teammates do well, she lets them know. If they make a mistake, she makes sure they know that the team has their back. She always says we have to win as a team. It’s never an ‘I’ game with her.”

Schneider might follow her sister Sarah into Ivy League softball. Sarah is currently a catcher at the University of Pennsylvania.

Being three years apart, they only were able to play one year together, and Sydney fondly remembers hitting an RBI double to score Sarah in the final playoff game against Warren High that season.

Schneider said six of the eight Ivy League schools have already reached out to her along with schools like Williams, Wesleyan and Amherst. Her softball skills, her 4.53 grade-point average, her 1420 SAT score and a bevy of extracurricular activities make her a sought-out student.

“The thing about Syd is that she has always been a phenomenal student,” Jorgensen said. “Last year, she made up her mind that she could do both and she stepped up her softball game equal to her academics. She always asks for extra hitting or extra fielding, extra fly balls. She just has that 100 percent attitude.”

Not only was Schneider asking for more training during the pandemic with her parents Spencer and Stephanie, she came up with an inspirational idea for a charity.

Letters To Our Elders.

Schneider started a pen-pal program between students and senior citizens living on their own. Schneider connected with several senior citizen organizations and has 20 active pen-pal matches, mostly through her classmates.

Schneider said she is working on expanding the program through her synagogue and said she might be able to dip into Koreatown.

“The isolation of the pandemic led me to this,” Schneider said. “I was thinking how lonely and bored it was to be at home, and a lot of senior citizens did not have the liberty of even going out for groceries during the pandemic.

“So I dreamt up the program and now have students communicating with seniors intergenerationally.”

Her senior citizen is named Stacy, a science fiction writer who has imparted her wisdom to Schneider.

“It was a match made in heaven,” Schneider said.

“It basically has the feel of a summer camp combined with reading comprehension and literacy, so it’s a lot of fun,” Schneider said.

Schneider also became a certified umpire, going to a clinic when she was 12 years old. She has worked in Santa Monica’s Recreation Leagues.

“I ejected a coach on a game-ending play one time,” Schneider said. “People knew not to mess with me after that.”

Schneider has been on the Head of School list every semester except one. She is a member of the National Honors Society and the Spanish National Honors Society. She earned the Silver-Level President’s Volunteer Service Award at Sierra Canyon and contributes to the Trail Blazer school newspaper and The Rambler literary magazine.

Even her research paper in Domzalski’s class was fresh and innovative: “Hyper Masculinity In Contemporary R&B.” Schneider focuses on Frank Ocean, a musical artist who defies that typical macho artist stereotype.

“She chose something she was passionate about and produced a work of scholarship,” Domzalski said. “It was truly investigative and truly inspiring.

“She writes extremely poetically with a real facility of the English language. She brings so much intellectual focus to each discussion. She has a very sharp intellect – she sees things quickly and puts it into practice.”

Schneider said she is wide open in terms of college selection, though Brown is known for writing and Columbia has the location, Broadway connections and film industry links.

Schneider said she would love to pen something like Charlie Brooker’s The Black Mirror, her favorite show at the moment and perhaps the foundation for a future writing career.

“It’s mind-boggling, dystopian science fiction,” Schneider said. “If you watch one of those episodes, you need to take a break from TV for a week because you’ll be in utter shock.

“That’s what I want to write.”