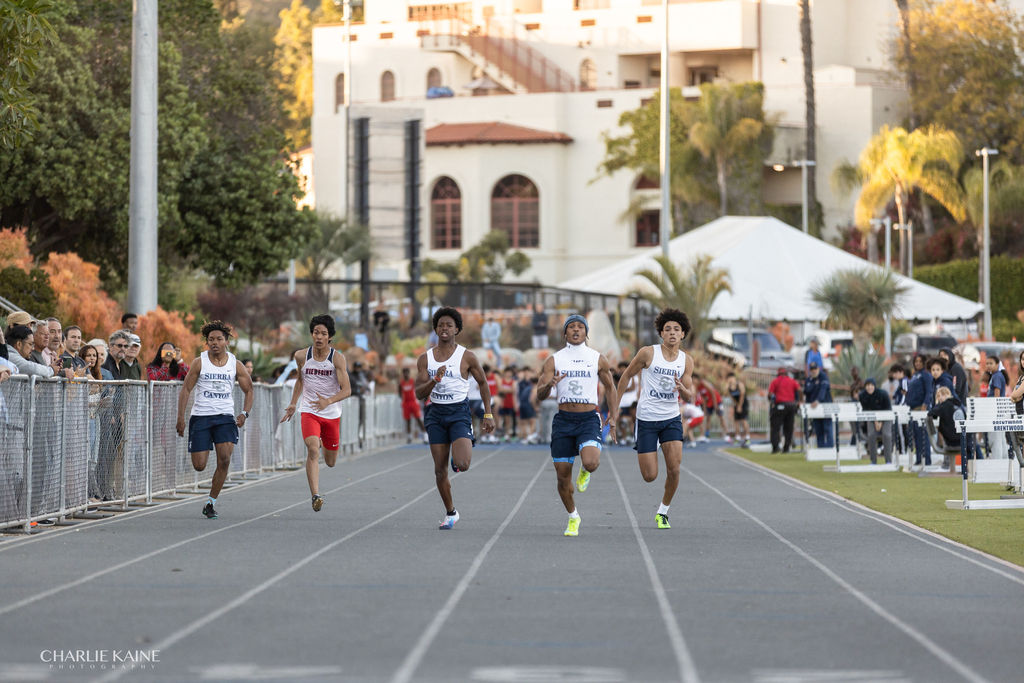 It was the kind of race that could serve as a tone-setter for the Sierra Canyon track and field season.

Senior Jake Goldman – the program’s top returner – took off from the blocks.

Sophomore Terrell Cooks Jr. took the baton for the second leg and handed off to senior D’Shaun Jones for the third leg. Senior Kamari Ramsey then anchored the 400-meter relay team to a nonleague victory over Castaic High School.

“That was fun,” Daniels said.

Maybe even more impressive is that this group nearly broke a school record that has stood for a decade in its first time together.

There was a new vibe. A sense of excitement. A different dimension.

Daniels was excited to have at least 13 members of the school’s vaunted football program participating and making an immediate impact, adding a new wrinkle to an highly anticipated season that already includes the reemergence of star distance runner Isis Diaz and a school record by the girls 1,600-meter relay team.

“We have a number of football players who have come out to run this year, and it’s a big difference,” Daniels said. “They’re all sprint types. We haven’t had this kind of turnout for a few years.

“Honestly I was considering stepping down after the season, but it is kind of revitalizing me.”

Daniels said that was also the last time the track and field program had as many football players come out and compete.

“They are capable of running 42s, and that will take them a long way in Division 4,” Daniels said.

Daniels said football coach Jon Ellinghouse approached him about the idea of the football players joining this year’s squad.

So far it has been a good fit.

“I tell them if they come to work, I guarantee they will feel a difference on the ball field,” Daniels said. “Every football player who has gone through our program has felt a difference.”

A second 400-meter relay squad of Jae’on Young, Jai Bell, Darryl West III and Alexander Bowens took third place in the same race against Castaic. All four of those runners are football players.

Cameron Brandt, Cooper Davis, Salahi Newsom and Dane Dunn are also out from the football team. Daniels said some linemen are expected to come out for the throws soon too.

Goldman is the non-football player of the group and is the top returning long jumper. Goldman has recorded a mark of 19 feet, 8 inches early this season, and Daniels said he is capable of 22 feet. Goldman also ranks among the top three fastest in the program.

Cooks might be the most decorated among the football players, having recorded marks of 11.06 and 11.13. Daniels said about 4-5 runners are already under 11.3 in the 100 meters and have had strong 200-meter performances too.

Daniels said he expects his 1,600-meter relay team to be “formidable” with more time together.

“They have all heard my motto by now,” Daniels said. “I like to say, ‘Why don’t we come out and shock a whole lot of people, work hard and have fun.’ And that’s what we’re doing.”

This track season will serve as a culmination to a banner career for Diaz, who already owns four school records.

Diaz has already rediscovered her form from her freshman campaign when she was a top-10 state performer in cross country and advanced to the CIF Southern Section Masters Meet in track and field.

In the fall, Diaz made a strong postseason push to return to the podium in cross country with a 10th-place finish at the CIF state finals.

Diaz is already picking up the pace in track and field.

Diaz claimed the Malachi Mile at the Maurice Green Invitational this past weekend with a mark of 5:09 for what Daniels called “an excellent early-season mark.”

“This girl is back,” Daniels said. “She’s running well and is right on the school record in the 800. She should break that in her next meet. She should run through all her records.

“She is on her way to another level.”

Gonzaga and Maya Bowens are fresh off their CIF finals run in soccer, and Laila Bowens was part of the state championship girls basketball run.

“They are going to break that record a bunch of times,” Daniels said. “To get that record this early in the season says a lot. Isis is really the only one who is in true running shape right now, so that means this group is only going to get faster.”

Daniels said he wanted to compete in the Russell Cup because it is held at the site of the CIF Southern Section Division 4 prelims on May 7.

“I’ve found that when the kids have a chance to compete at that site before the prelims, they are more familiar with it and it takes some pressure off,” Daniels said. “They know where to go, where we set up camp, what it feels like. They become a lot more familiar with it.”