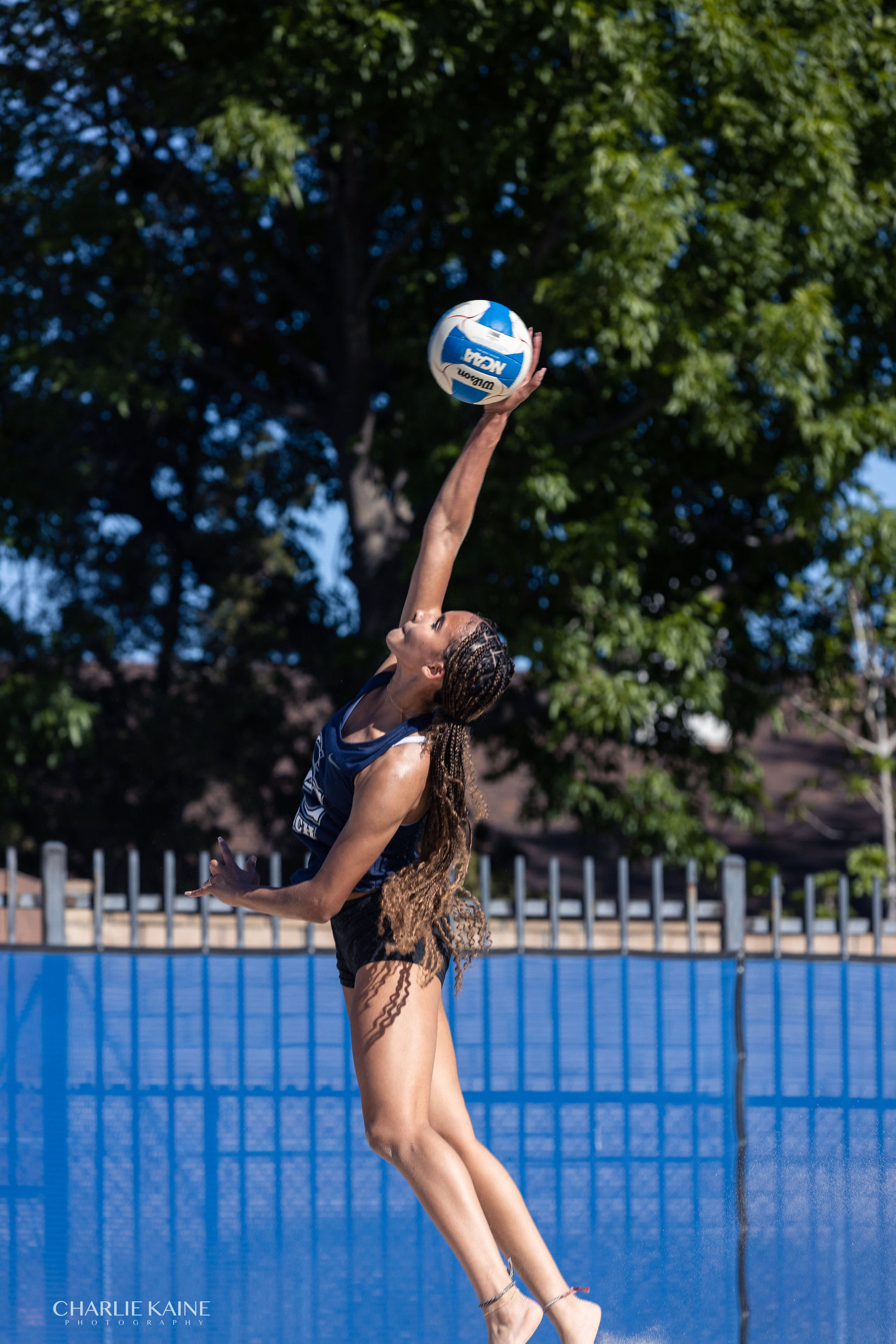 The warmth of the sun, the crash of the waves, the feel of the sand.

“We’ll have the music going – radio-edited versions of whatever the girls want to put on,” Phillips said.

Phillips is trying to restore a program that captured league titles in 2016 and 2018 but took a hit in numbers due to the pandemic canceling the past two seasons.

His plan is to create an enjoyable and competitive atmosphere to bring out as many girls as possible.

Come for the beach, stay for the high-level volleyball.

“It’s about getting the girls on the beach, having fun, playing volleyball and enjoying themselves,” Phillips said. ““It also helps to be winning.”

Phillips certainly knows how to build a program. He is part of the husband-wife coaching duo with Stefanie Wigfall that has guided Sierra Canyon’s indoor girls squad to two CIF Southern Section titles and one CIF state crown.

The beach volleyball format features three tandems facing off in a best-of-three format.

Matches are held either in Malibu at Zuma Beach or in Santa Monica at Will Rogers State Beach, Ocean Park or Ocean Park North.

Sierra Canyon also has the luxury of a sand court on the lower campus for practice.

“It’s definitely different from the indoor game. It’s only doubles, just you and your partner,” Phillips said. “There is a lot of talking and communication that needs to happen, and it takes a lot more training.

Though Sierra Canyon lost to Notre Dame Academy, it won a pair of Gold Coast League matchups. Sierra Canyon will take on Windward on Wednesday, March 23 and Harvard-Westlake on April 13.

Phillips said he has been pleased with all three of his tandems.

Junior Olivia Babcock and freshman libero Lauren Lynch have formed the No. 1 tandem for Sierra Canyon and have a 6-0 record.

Sun’s out, guns out.

Babcock is verbally committed as an indoor player to the University of Pittsburgh, which is fresh off an NCAA Final Four run. Lynch entrenched herself on the indoor squad that captured an unbeaten league title.

“They have been playing really well and have been gelling,” Phillips said. “They can be dominant.

“Olivia has already tattooed a couple of girls. That’s always a lot of fun.”

The No. 2 team features Natalie Babcock and Rachael Reyes, a team that just came together over the weekend.

“They made a seamless transition to playing together,” Phillips said. “They jumped in together  and started playing well right away.”

The No. 3 team boasts a pair of seniors in Nala Henderson and Natalie Younan who are lending their veteran presence.

“I’ve been impressed with Nala and Natalie for sure,” Phillips said. “They are seniors who have taken a leadership role. They are at every practice, their communication has been really good and they have had a good job relaying information to the team.”

Phillips said he has 20 girls on his roster.

After the three tandems are chosen, the rest of the squad will also jump on the remaining courts and compete against the additional players from the opposing school.

It is their chance to experience and grow with beach volleyball.

With no playoffs scheduled for this season due to ongoing pandemic concerns, Phillips is focused on building for the future.

“We wanted to get the girls out there and get some touches, especially after the whole COVID situation,” Phillips said. “Next year we will go pretty big with the playoffs.

“For now, it’s not a bad way to end the day, especially when it gets so hot in the Valley. It’s great to hang out and catch some ocean breezes.”