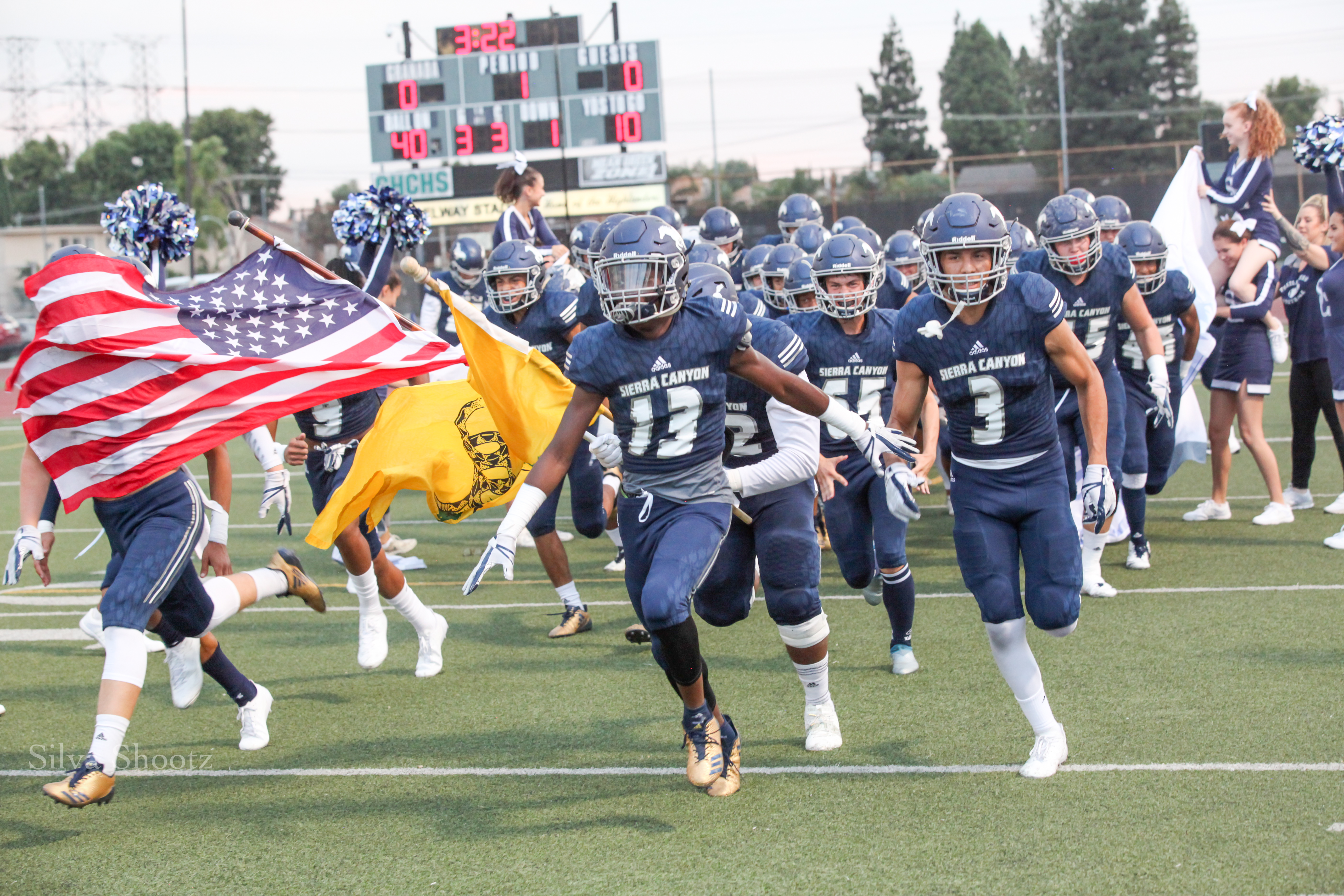 Led by freshman quarterback Chayden Peery, the Sierra Canyon Trailblazers (2-1) shut out the Grace Brethren Lancers (2-1), 35-0 Friday night at Moorpark College’s Griffin Stadium.  The defense dominated, a young quarterback stepped up, and the running backs punished the Lancers in the win.

As the game began, the size of the Lancers defensive linemen was impressive.  They started well, sacking Sierra Canyon’s starting quarterback, Johnny Hawkins, two times on the first drive of the game.

Coach Jon Ellinghouse made a quick switch at quarterback to freshman Chayden Peery on the next drive and the offense started to gain momentum.

“We had to adjust to their speed,” said Coach Ellinghouse.  “They had a heck of a defensive front.”

After being called in for Sierra Canyon’s second drive of the game, Peery looked ready to play and took control of the offense and the game. He completed 10 of 15 passes for 142 yards and a touchdown.

“I was a little bit nervous” said Peery, “I knew I was well prepared since I have been watching film and splitting reps with Johnny.”

Coach Ellinghouse seemed pleased with the way the team played Friday night and very happy about the momentum change that came from putting Peery in at quarterback.

“Johnny and Chayden were competing all week and all season,” ” said Coach Ellinghouse. “We were looking for a momentum change and Chayden captured that and did a great job.”

Sierra Canyon’s first points of the game came from the defense off of a botched lateral pass by the Lancers that resulted in a fumble recovery by Daniel Kamulali who ran the ball back six yards for the game’s first touchdown.  Kamulali recorded his second turnover late in the second half when he intercepted a pass from Brethren’s quarterback Michael Zele, putting the game away for the Trailblazers.

The Sierra Canyon defensive line also played well against a much larger offensive line fielded by the Lancers.  Noah McGregor was in the Lancers’ backfield all night recording 1.5 sacks and two tackles for losses.

Chris Cannon also added two sacks during the game and threw the Lancer’s quarterback down to the turf on big sacks in the second and fourth quarters.

Corey Jones had another magical night for the offense and had a big week personally, receiving his first Division 1 offer from UCLA. “It was surreal” said Jones, “I still can’t believe that I got my first offer.”

He looked worthy of that offer catching a key 45-yard pass from Peery in the first half and rushing for a 54-yard touchdown, where his amazing speed was on display.

The players were indeed ready to play and the coaches did their jobs as the Trailblazers executed an impressive game plan on both sides of the ball against a physically imposing opponent.