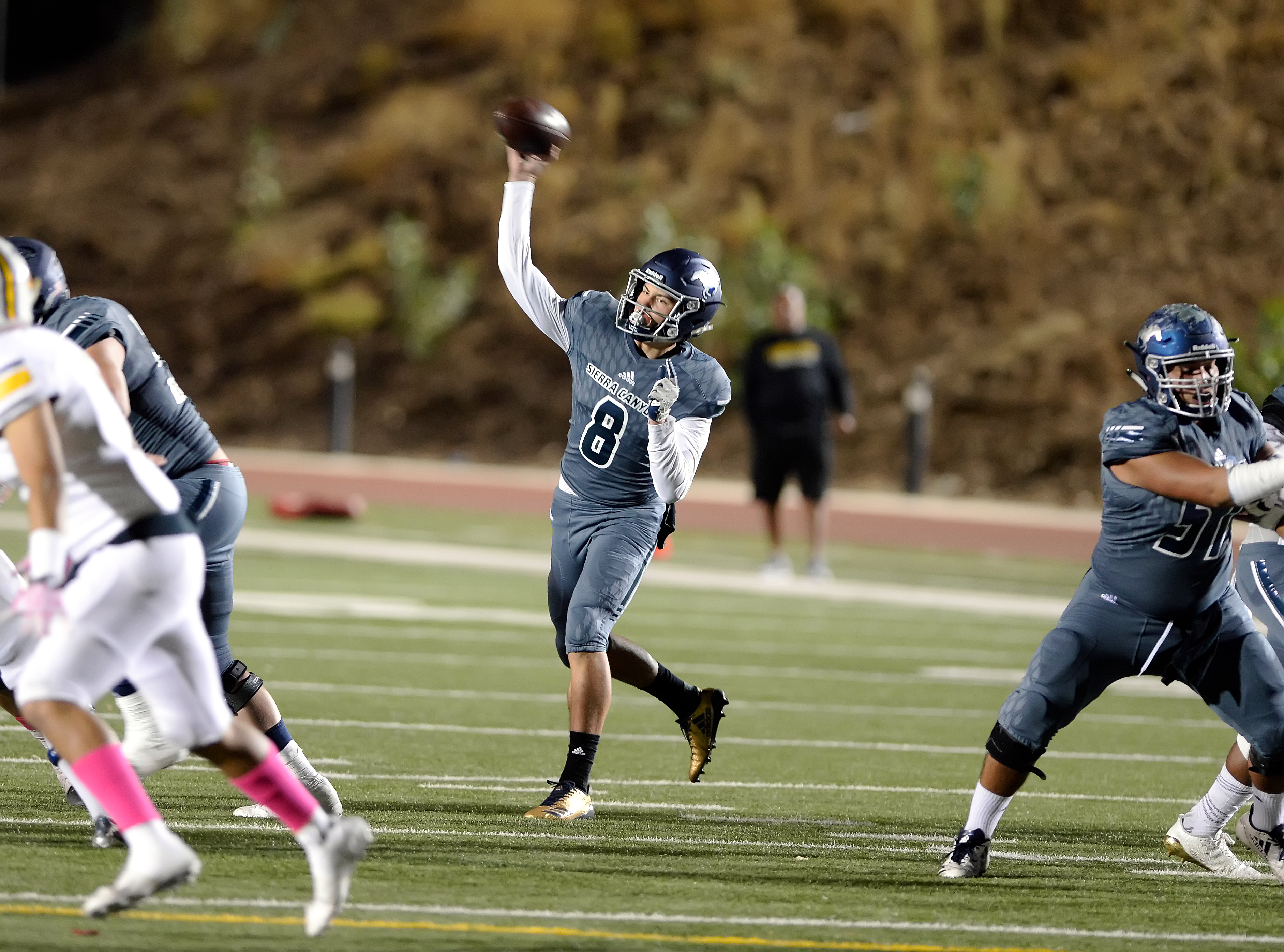 In the first Gold Coast Conference game of the season, the Sierra Canyon Trailblazers (7-1) rolled over the Campbell Hall Vikings (6-3) on a perfect night for football at Pierce College. The final score was 51-7, but as lopsided as this score was, it could have been much, much worse for the Vikings.

Chayden Peery, Sierra Canyon’s star freshman quarterback, only played the first quarter, with back-up quarterback Johnny Hawkins taking snaps during the second quarter. The fun part of the night was watching the future Trailblazers in action as some members of the JV team got to play in the second half.

Aaron Gutierrez, the Trailblazers’ third string quarterback, was efficient and the young receivers were ready to play when their opportunity came after half-time.

The Trailblazer’s again got off to a great start in the first half scoring four touchdowns in less than 15 minutes of play.

Sophomore running back Hunter Williams rushed for a 33-yard touchdown to put the Trailblazers on the scoreboard and senior running back Michael Myrick scampered for a 14-yard touchdown on Sierra Canyon’s next possession, making the score 14-0 after just a few minutes of play.

“I think I played well even though they pulled the starters so fast,” said Myrick. “This week was all about focusing on speeding up the offense and making sure that the offense stayed in rhythm at a faster pace.”

The Trailblazers did play fast and it was clear that they were using this game as an opportunity to iron out some wrinkles in the offense to prepare for some of the bigger games coming up on their schedule and in the playoffs.

The touchdowns continued to light-up the score board when Hawkins caught a touchdown pass from Peery and sophomore Dylan Devito caught a 30-yard touchdown from Hawkins to close out the scoring in the first half with the Trailblazers leading 28-0.

In the second half, many young players stood out, including freshman receiver Q. Sumlin, who caught four passes for more than 20 yards and a touchdown, sophomore running back Jacob Huddleston, who rushed for 40 yards on four carries, and freshman receiver Donovan Williams, who caught a 25-yard pass from Gutierrez.

The defense dominated the Vikings’ offense in all areas as well, limiting their quarterback to only eight completions on 28 attempts while holding their running backs to only 49 yards rushing. The Trailblazer’s also recorded three interceptions, including a pick-six by freshman DJ Harvey.

The Vikings fielded a small number of players that were completely over-matched by the Trailblazers’ size and athleticism. The game was over before it started, which allowed several Sierra Canyon players to get some needed rest as they head into the final stretch of the season and another trip to the playoffs.

Sierra Canyon has improved each week and as they enter the last part of their regular season schedule, they look like a complete team.

“We like to think we prepare the same way every week,” said Coach Jon Ellinghouse. “We found some things that we wanted to work on this week and we had a good week of preparation.”

“There are some big games ahead of us and we will have to be ready when we get there,” Ellinghouse continued.

Coach Ellinghouse certainly understands where his team is at this point of the season as the Gold Coast Conference championship is on the line this coming Friday when the Trailblazers visit the undefeated Brentwood Eagles (7-0-1).