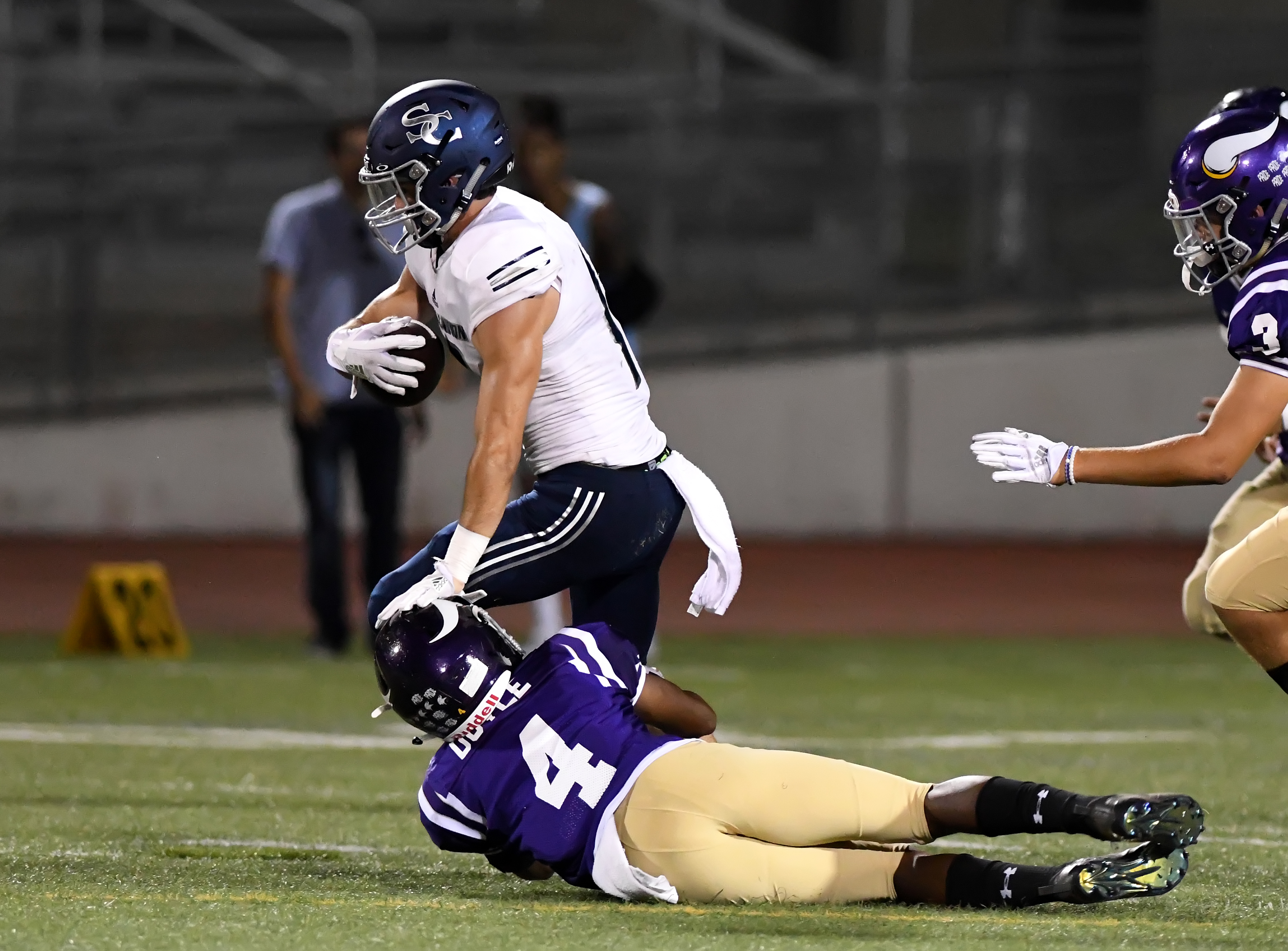 VALENCIA — Last year it was Calabasas. Friday night it was Valencia.

The Sierra Canyon football team is making a habit of beating higher division teams. The Trailblazers started fast, fought through adversity and found away to come out on top for a wild 44-38 nonleague victory against Valencia.

The game was tied with under 2:30 to go when Sierra Canyon sophomore quarterback Chayden Peery snuck in from one yard out to give the Trailblazers what would be the winning points with 2:18 remaining.

Valencia gained one first down on its final drive but Sierra Canyon’s defense was too good and forced a turnover on downs to seal the second biggest regular season win in school history.

“Coach (Ellinghouse) had a great game plan for us and we executed,” Peery said. “This team is all about us being brothers. We fight for each other.”

“We found ways to lose other games against Westlake and Lawndale,” Sierra Canyon two-way player J.J. Hernandez said. “We kept fighting and knew the game plan. This was a big win for us. We had to prove ourselves.”

Things couldn’t have gotten off to a better start for Sierra Canyon. E.J. Gable scored on a 58-yard touchdown run and Josh Bryan had one of his two interceptions to set up his own 30-yard field goal.

However, Valencia came right back with a Davis Cop 13-yard touchdown pass to Hunter Koch, a 4-yard touchdown run from Luring Paialii and a 30-yard field goal from Ty Morrison.

Hunter Williams found paydirt on a 72-yard run for Sierra Canyon to knot the game at 17-17 after the first twelve minutes. The scoring was quick and fast.

The teams traded touchdowns until Peery found Jared Staub for a 72-yard touchdown pass with 2:29 remaining in the half. Staub was able to break free down the sideline and into the end zone thanks to a monster block from J.J. Hernandez.

“I was looking to help my teammate,” Hernandez said. “It was a risky shot. You never know with the referees and the penalty flag for a hit like that. It was clean, though.”

Valencia had the momentum in the second half when Cop plunged in from one yard out to again tie the game this time at 31-31 with 7:53 remaining in the third quarter.

A pivotal sequence came in the third quarter when Peery threw an interception but the Trailblazers quickly forced a three-and-out to thwart another possible quick scoring opportunity.

After a non-existent first half due to double teams, sophomore receiver D.J. Harvey came alive with two catches for 90 yards. His 43-yard reception in which the shifty playmaker came back to meet the ball went for a touchdown after he ran through two defenders and left another stopped in his tracks.

Peery finished 13 of 20 for 357 yards, Gable and Williams each rushed for 88 yards on a combined 17 carries and Hernandez and Staub each had 112 yards receiving. Hernandez caught six passes and Staub had three receptions.