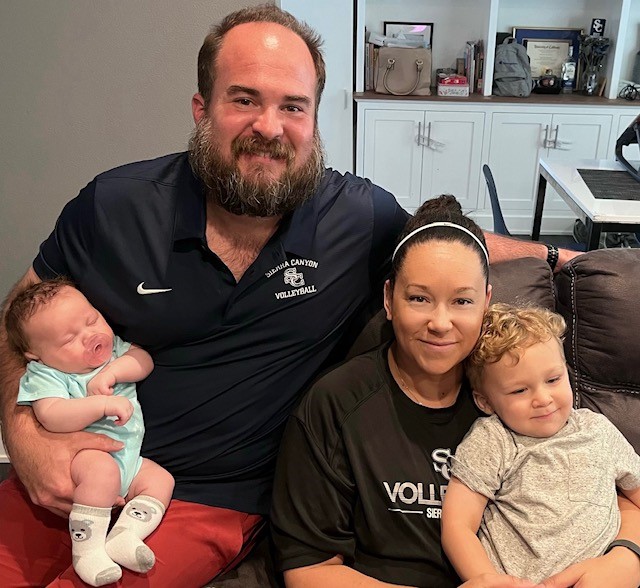 Volleyball coaches have a lot on their plate

Just in time for the high school girls volleyball season.

“We’ve been very blessed as a family,” Wigfall said.

Wigfall said it has been a different experience this time around.

Carter was born with the COVID-19 pandemic serving as a backdrop.

Cole’s arrival came at the start of the school year and in conjunction with a potentially historic volleyball season for the Sierra Canyon program.

“When we had Carter, the world shut down 6 or 7 weeks later due to COVID. We got to be home all day every day,” Wigfall said. “There was nothing going on in the world except raising our baby and learning to be new parents. No work, no travel. Just us and the baby, and it helped us develop a strong bond with our first son.

“With Cole, we were back to coaching 6 or 7 days later. Luckily we feel we have our parent chops now and do not feel as rookie as we did before. It was about getting life back to normal very quickly.”

Phillips served as the interim head coach when Sierra Canyon traveled to the Iolani Tournament in Hawaii, guiding the Trailblazers to a strong second-place finish.

“Darrin has done a fantastic job,” Wigfall said. “With me being gone, I felt it went a lot smoother than it could have been. Him and I are in lockstep. We go over practice plans and strategy. Even when I’m not there, it feels like I am.

“Darrin has definitely been sleep-deprived, but he’s such a positive person, hands-on teammate and a great dad.”

Wigfall said Baby Cole has not met the Sierra Canyon team in person just yet, saying she wants to wait for this recent record-setting heatwave to subside a bit.

“We’ve had him on Zoom with some of the team,” Wigfall said. “We’ve had a lot of support too. My mom has helped out quite a bit, and the meal train was so helpful and generous. Our volleyball community has been incredible.”

Wigfall and Phillips have found a balance between raising a newborn and coaching a top-tier volleyball program.

Sierra Canyon has impressed to open the 2022 campaign, racing to a 15-2 record while earning a No. 3 ranking in the elite CIF Southern Section Division 1 poll.

Sierra Canyon has posted impressive road victories over Santa Margarita and Santa Barbara and an eye-opening victory over Redondo. Sierra Canyon has also won its first two matches in its first year in the Mission League, sweeping Marymount and Notre Dame heading into Wednesday’s showdown against visiting Harvard-Westlake.

“Going into our first year in the Mission League, we loaded up on our nonleague matches,” Wigfall said. “We never had to worry about making the playoffs in the Gold Coast League. It’s different now. We wanted to be as prepared as we could be.”

Senior Olivia Babcock, a University of Pittsburgh recruit, has been the ringleader for an talented group. Sophomore libero Lauren Lynch has elevated her play recently, and junior outside hitter Danica Rach has been a steady force.

“Everyone has been playing so well,” Wigfall said. “This is the most talented Sierra Canyon has ever been on paper. They are coming together from a chemistry standpoint, they are figuring out their priorities and weaknesses and they really are attacking it in the gym. It’s so much fun.

“They understand the potential they have, and they are not letting this opportunity slip by.”

Starting the season with a baby. Maybe ending with a title.

It could be a special season at Sierra Canyon.