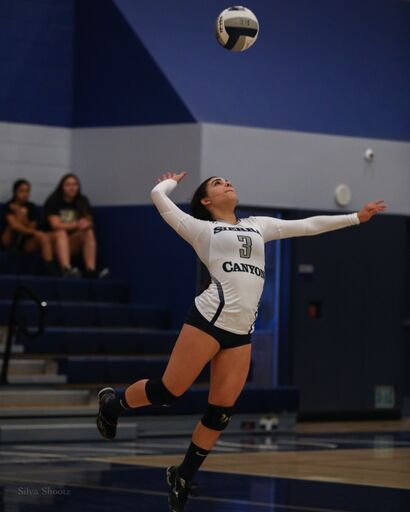 It was another dominant victory for the Sierra Canyon girls volleyball team Tuesday night.

The Trailblazers had little trouble again in a nonleague match. This time against LaSalle of Pasadena. Sierra Canyon only faced a minor hiccup in the third set of and eventual 25-17, 25-14, 25-23 victory.

After leading by a wide margin in the final set, Sierra Canyon saw LaSalle pull even at 23-23 before winning the next two points.

The victory was third in a row over the Lancers after knocking them off in last year’s Southern Section championship game and coming from two sets down to upend LaSalle in a So. Cal. state regional championship game.

Once again, Sierra Canyon received contributions from up and down the lineup.

Michigan-bound May Pertofsky had 13 kills, five digs and an ace for the Trailblazers. Jaylen Jordan, a hard-hitting junior, added 12 kills, nine digs and a block.

Sierra Canyon was also bolstered by Yale-bound Zoie Stewart’s play in the middle, the all-around play from Addison Peeler and the serving from junior Jordan Pillsbury.

The first set was close until about the 10-point mark. The Trailblazers created some space and cruised to set the tone. In the second set, Sierra Canyon took a 20-10 lead before closing it out and then sent the fans home happy not squandering a set where it lost all of its 10-point lead.

The team is back on the court at 7 p.m. Thursday when it hosts Viewpoint in a Gold Coast League opener for both schools.