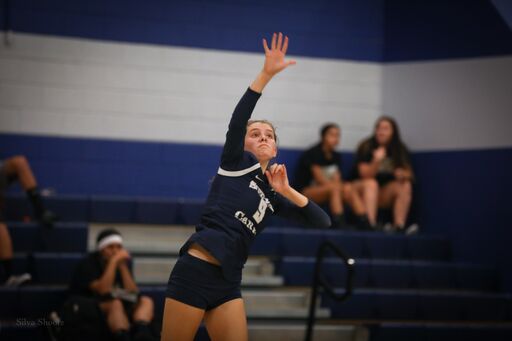 That was the “cattle call” Thursday evening as the Sierra Canyon girls volleyball team finally made its home debut for the 2018 season after starting the year on the road for two weeks, which included stops in Hawaii and San Diego.

And how nice home can be. The Trailblazers had no issues against Citrus Valley with a dominant 15, 16, 18 sweep of its first round section playoff opponent last year on its way to winning the  Div. 2 state championship. Sierra Canyon picked up a section title along the way.

“We’ve been working hard since San Diego,” Michigan-commit May Pertofsky said. “We are trying to stay together, stay excited and keep the energy up.”

Sierra Canyon (7-5) took control of each set fairly early in all three sets. The Trailblazers steadily grew its lead in each set to make quick work of the Blackhawks, who spent more time on the bus than on the court.

“We are getting better at defense,” Simpson said. “We lost a great player from last year’s team. Laina (Bolton, Alexa (Horwitz) and Jordan (Pillsbury) are trying to fill her shoes. We just want to limit our errors and get through games.”

The player Simpson was referring to was Zoe Fleck, a libero and defensive specialist now patrolling the court for UC Santa Barbara.

The Trailblazers also received key contributions from Addison Peeler and Zoie Stewart. The duo’s play at the net and in the middle proved too much for Citrus Valley to contend with.

Sierra Canyon had a good time in Hawaii and showed very well in San Diego despite coming away disappointed in tough setbacks against Mater Dei and Torrey Pines. The Trailblazers had set point against Mater Dei, one of the state’s powerhouse programs year-in and year-out.

“It was good to start off well at home,” Pertofsky said. “We are passing better and our serve-receive is good. We are able to put balls away which is helpful.”

Sierra Canyon is back in action next week with two home matches. The trailblazers host LaSalle of Pasadena in a nonleague match at 5 p.m. Tuesday and open up Gold Coast League competition at 7 p.m. Thursday against Viewpoint of Calabasas.