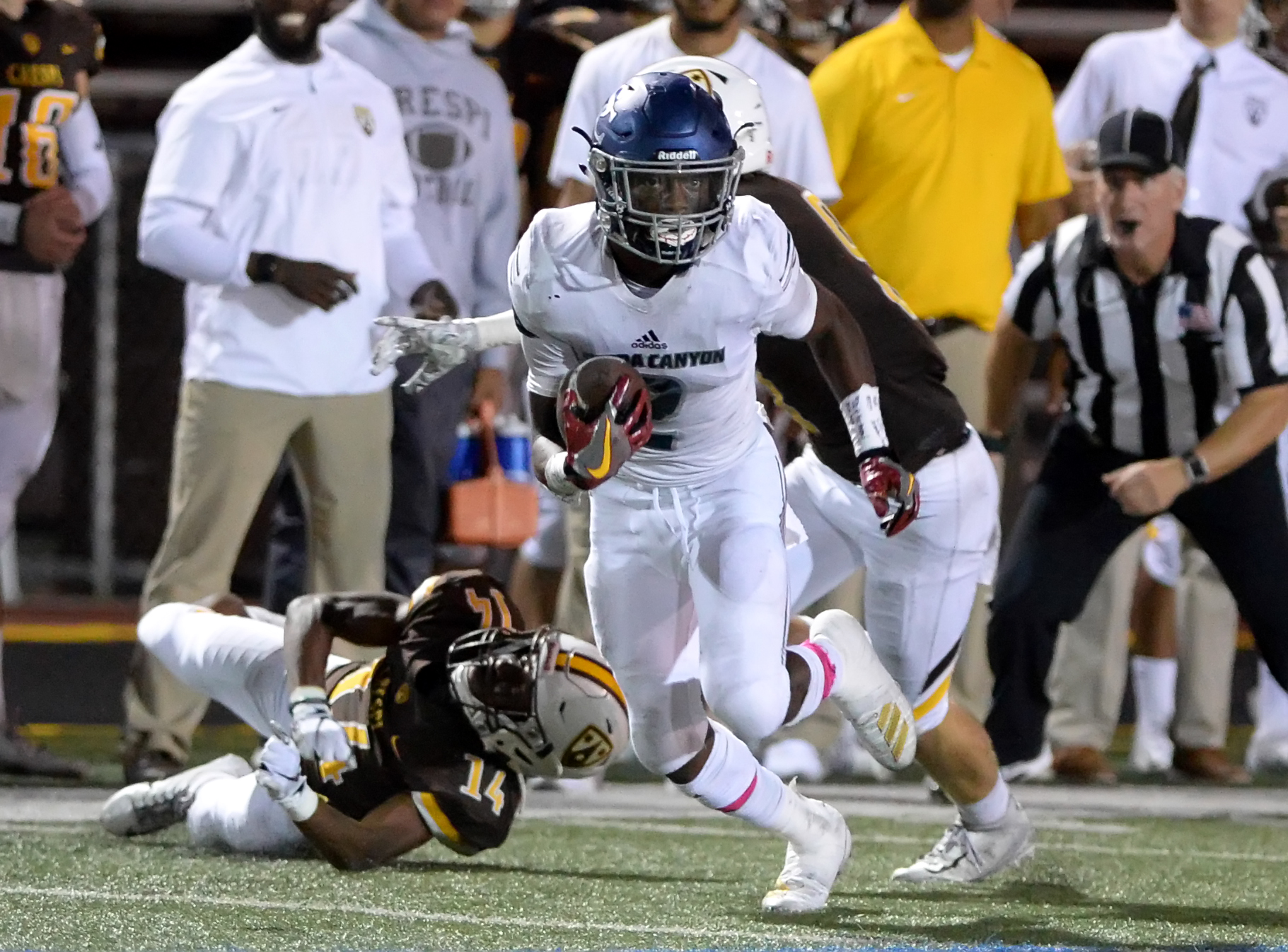 The Sierra Canyon football program has sent its fair share of players onto college. The Trailblazers have players littered all over the country, with an emphasis on the Ivy League and their fair share in the PAC-12.

“Sierra Canyon helps gets players to the next level,” standout junior wide receiver D.J. Harvey said. “That’s one of the big reason I chose to come to school here. I knew I would get exposure and looked at by college coaches.”

“My sophomore year I would send highlights and tape (video) to the coaches, but they couldn’t contact me,” Harvey said. “But when Sept. 1 of this year rolled around my phone didn’t stop. I got literally 25 calls and/or texts welcoming me to the whole recruiting world. Talking directly to coaches helps build relationships.”

Harvey received his first real offer from Southern Mississippi and indicated it changed him for the better.

“It was surreal that I got a real scholarship offer,” Harvey said. “The way I carry myself is different now. There are lots of people looking at me and looking up to me.”

Harvey plans to trim his list to 10 or five schools before his senior year. The opportunity to play early will be a major factor.

“I want to play right away,” Harvey said. “I want to get my degree and put my family in the best situation I can. I want to represent Sierra Canyon in the best way.”

Harvey isn’t the only player with a lot going on with recruiting.

J.D. “Quatro” Sumlin is a junior running back and Chayden Peery is a junior quarterback. Sumlin is hearing from BYU, Washington St., UCLA, Wyoming and Utah the most right now.

“I am really enjoying the process of building relationships with coaches.” Sumlin said. “I appreciate the college coaches taking their time to look at us. The relationships can last a lifetime and help out in the long run. There could be options down the road.”

Sumlin indicated texting, direct messaging and email have taken over as communication methods in everyday recruiting. Hard mail still comes but less frequently than 15-20 years ago when certain prospects could receive up to 10 pieces of mail every day from the same school.

Sumlin wants to come across in a good way. It’s challenging.

“There is pressure to impress certain coaches,” Sumlin said. “You want to say and act how you think they want you to.”

Sumlin plans to make a commitment during his senior year after the season.

“I want to be fully committed,” Sumlin said. “I want to really make sure on the decision.”

“It teaches you patience and not to get frustrated,” Peery said. “You have to stay level-headed. Just try and win games and do what you need to do.”

Peery likes being pursued and building a good rapport with the coaches.

“It’s nice to not go unnoticed,” Peery said. “It’s nice to talk to coaches who understand if your numbers (statistics) aren’t as good as other guys numbers. They know the backstory behind that stuff and don’t hold it against me. They know what I can do and bring to the table.”

Peery says he could make a decision in two weeks if the timing and school is right. Or he could wait until February or March or April of 2021.

“I have no timetable. I will make a decision when I feel the time is right.”