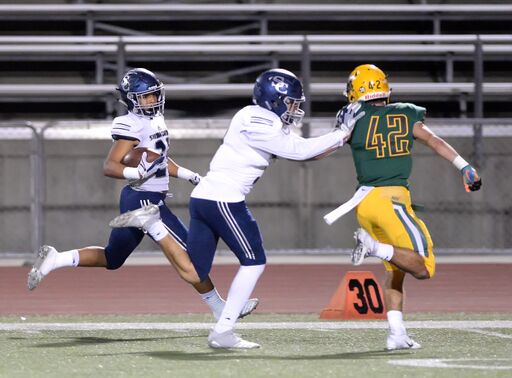 The Sierra Canyon football team put together one of its best performances of the 2018 year Friday night in Ventura County.

It couldn’t have come at a better time. The Trailblazers were absolutely dominant in a 62-21 thrashing of Moorpark in the Div. 3 quarterfinals.

No. 3-seed Sierra Canyon moves onto next week’s semifinals on the road against No. 2 Citrus Hill. It will be Sierra Canyon’s fourth semifinal appearance in the past five years. The Trailblazers won title in 2015 and 2016.

A short time later Hunter Williams ran in one of his two touchdowns from nine yards out. The score was set up by Brendon Gamble’s 76-yard reception from sophomore Chayden Peery.

After Moorpark scored a touchdown on Steven McDaniel’s 18-yard touchdown pass to Noah Cronquist to have a brief look at the game, Sierra Canyon sprinted away in the second quarter turning the game into a complete laugher by halftime.E

The scoring drives consisted of five, four, one and four plays from scrimmage. Sierra Canyon’s offense was going up and down the field like a hot knife through butter. It was 42-7 by halftime and that was it.

Things didn’t get much better in the second half. The wind was completely taken out of the Musketeers (8-4) sails when Williams broke free for a 75-yard touchdown run and Gamble found the end zone from 41 yards out.

The game was played with a running clock the entire fourth quarter.

Sierra Canyon received contributions from so many different players. Peery was 10 of 16 for 290 yards with three touchdowns and one interception. Peery also had his rushing touchdown.

The running game was by committee. Nine different rushers combined for 254 yards on 24 carries.

The youngsters got a chance late in mop up time. Jason Jones had six carries for 14 yards with a touchdown and D’Shawn Jones and Jacob Huddleston each had one carry.

Peery spread his 10 completions among four receivers. JJ Hernandez caught four passes for 85 yards, Harvey had three receptions for 89 yards, Gamble caught two passes for 102 yards and Jared Saub had one catch for 13 yards. There was also one special reception late in the game. Freshman Amari Powell hooked up with team favorite Ray Sullivan for a 38-yard pass play. The entire sideline erupted for Sullivan, a senior.

Moorpark was led Steven McDaniel who completed 18 pf 29 passes for 194 yards and two touchdowns. McDaniel connected with Noah Cronquist and Jake Mateko for scoring plays of 18 and 15 yards, respectively.