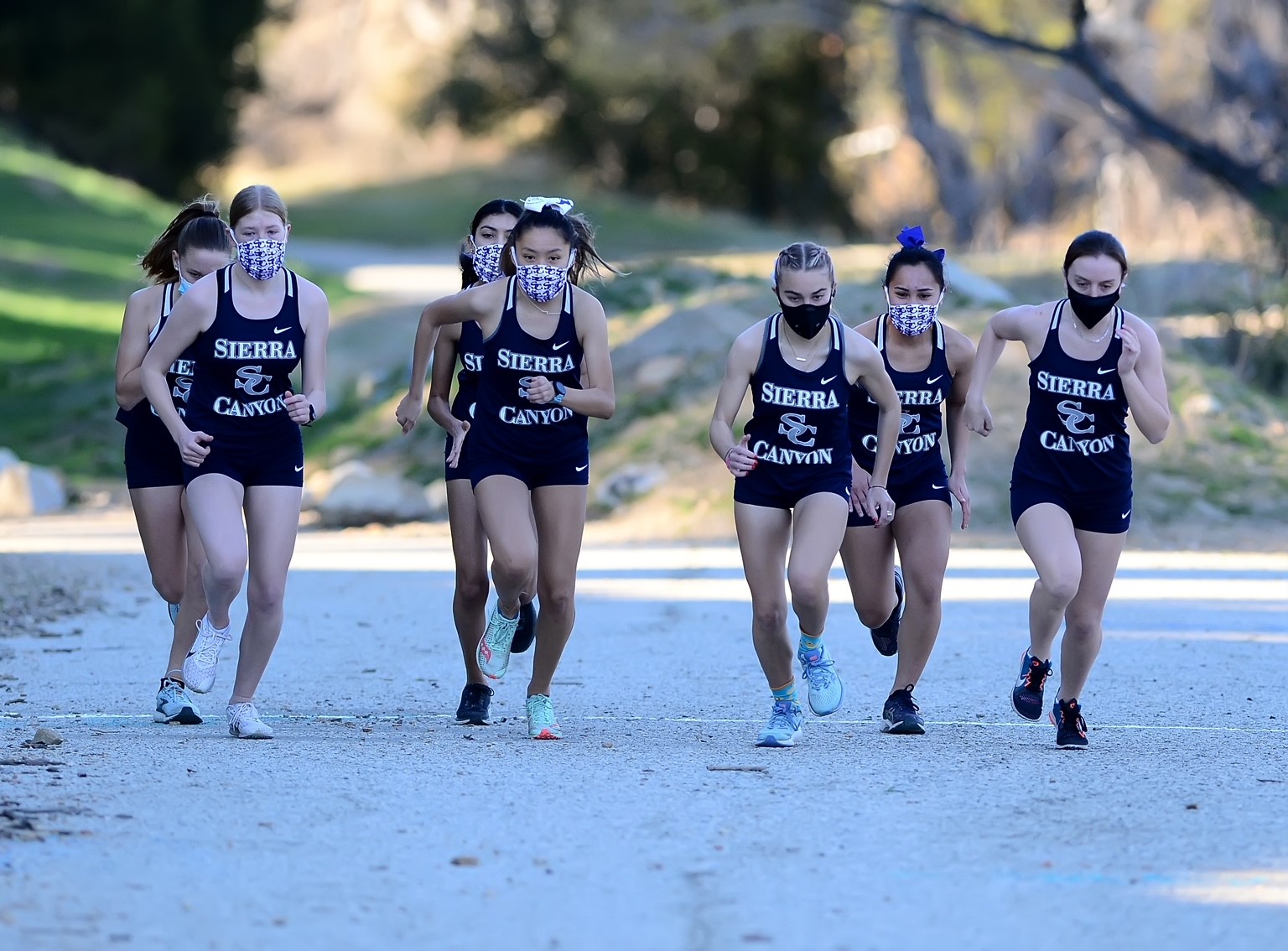 Race Day was finally upon the Sierra Canyon cross country team, and those familiar feelings began to take shape as Diaz departed for the opening Gold Coast League meet at Balboa Park.

“It felt normal at first,” Diaz said. “But when I got there, we were the only team there, the course was not set up, the clock wasn’t there and Coach Troy (Samuels) was timing everything. It was completely different.

“It was like I was just going to practice at a park.”

Instead Diaz and her teammates were arriving for a “virtual meet” where each league team participates on different days or time slots to run a designated course.

The Trailblazers were essentially racing the clock.

The times are to be recorded by each coach and uploaded in a spreadsheet.

It is apparent that cross country in 2021 is going to look and feel vastly different due to the socially distant protocols in place resulting from the COVID-19 pandemic. “It definitely doesn’t have the same vibe as a normal cross country meet,” said Diaz, an all-state Division 5 runner. “But I am glad we still get to have a cross country season.”

There will be no CIF state finals. No CIF Southern Section prelims or finals. Invitationals and cluster meets have gone by the wayside for now.

There is not even any certainty that there will be a Gold Coast League finals.

Virtual meets will become more commonplace. Experimental ideas such as a “wave start” where different groups will begin racing at staggered times will also be tried for dual meets.

The dual meets are even featuring dual chutes at the finish line to minimize contact with opposing runners.

“Given the circumstances, it’s great that they can even go out and run,” Samuels said.

Samuels said training has been a stop-and-go affair.

Samuels estimated he had to shut down training four different times due to the uncertainty of the start of the season and the delays caused by the pandemic. He has mapped out individualized workouts for his runners and kept in contact via weekly Zoom calls.

“The kids are in pretty good spirits overall, however I am mentally trying to find more ways to motivate them than ever as a coach,” Samuels said. “I find myself continuing to say to the kids that we all know this is different, but we’re going to do our best to be focused, to run on our own, do our best and see where we land.”

Sierra Canyon opened the season with a Gold Coast League dual meet at Paraclete on Feb. 6, taking five of the top seven spots to beat a Paraclete team that did not have the minimum five runners required to record a final score.

Diaz covered the three-mile course in 22 minutes and 45 seconds, beating the Paraclete runner-up by 56 seconds.

Yet Diaz was nearly 4 minutes off her previous best when she set a course record at Paraclete.

“No one in the country is running close to the same times as last year – they just aren’t,” Samuels said. “I just keep telling them to do their best. They will get accustomed to this new season.”

Sierra Canyon, usually reliant on athletes from other sports to field its boys cross country team, does not have enough runners to field a boys team this year.

“From start to finish, it’s really difficult to get after it in a race when no one is on your shoulder or you are not on someone’s shoulder,” Samuels said. “But given the circumstances, it’s great for them to go out and run.”

The results of the virtual race at Woodley Park are still being tabulated.

The Gold Coast League finals are tentatively scheduled for March 10, but the league schools will try to determine the best course of action while consulting guidelines from the high school governing body and state health officials.

Diaz knows this season will take a different mentality, especially without the adrenaline of a traditional race.

“It’s definitely different not to have someone right there pushing you,” Diaz said. “I am going to try to imagine someone is in front of me or right behind me.

“I just have to motivate myself.”