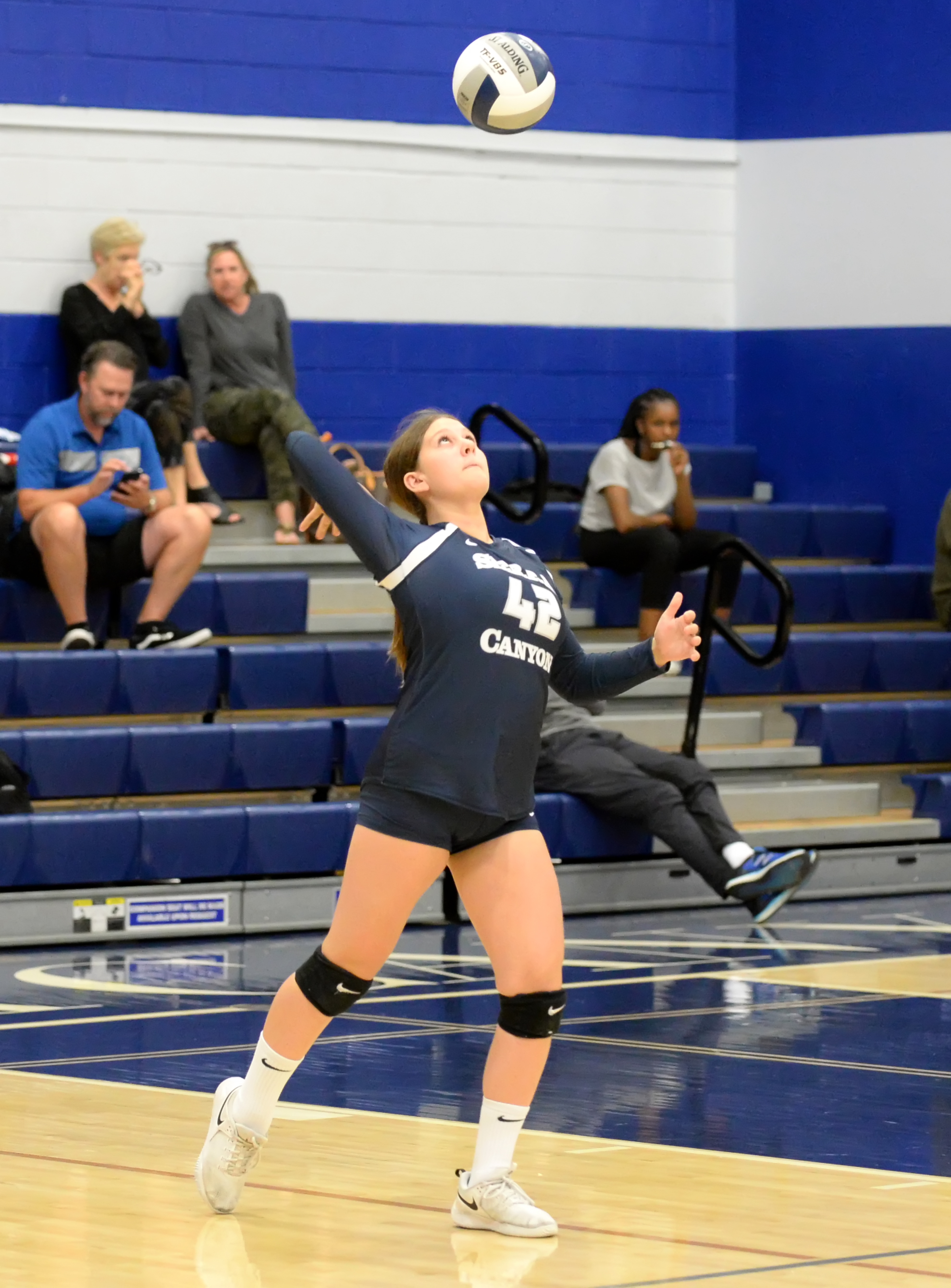 Lindsay Sobel #studentfirst She is a Sierra Canyon Lifer, a non-profit founder, and a force of nature in the classroom and on the volleyball court

Determined to be one of the 10 finalists to perform her poem in front of the student body, Sobel did not hold back.

Sobel chose Robert Browning’s “The Last Duchess.” It is the Black Diamond of poetry, a Category 5 of a choice compared to the shorter and safer selections of some of her classmates.

“I really wanted to challenge and push myself,  so I went with a very difficult poem,” Sobel said. “It was hard to learn, and it took a long time. It was pretty nerve-wracking actually, but I wanted to push myself to my limits and I wanted to impress my teacher.”

“The Last Duchess” features 28 rhyming couplets of iambic pentameter that serves as one of the most complex and layered pieces of poetry to understand, let alone perform.

It was ambitious. It was daring. It was vintage Sobel.

Bit by bit, Sobel chipped away at this behemoth. Sobel said she memorized about 5-10 lines per night and visited Zielinski during her free period to work on her delivery, performance and understanding.

Ultimately Sobel earned her spot to perform in front of the school.

“I never expected her to be a finalist, but I don’t know why I ever doubted her – she absolutely nailed it,” Zielinski said. “She hit it out of the park with a really difficult piece of poetry, but that’s just the kind of person she is.

“I will never forget looking at her during that performance – it was such a powerful thing.”

Just like her Ars Poetica performance, Sobel has been a tour de force in high school.

Sobel, a junior, is described as one of the most engaging and thought-provoking students in her classes. She has established herself as a viable contributor on Sierra Canyon’s vaunted girls volleyball team and has even started her own charity.

Sobel is the personification of Sierra Canyon’s Student First award that celebrates excellence in academics and athletics.

Sobel is one of 20 Sierra Canyon “lifers” in the current class of 2022, who have attended the school since kindergarten.

Yet Sobel blazes her own path as a Trailblazer.

“Sometimes people think there’s entitlement there, but Lindsay works for everything,” Sierra Canyon girls volleyball coach Stefanie Wigfall said. “She takes advantage of the opportunities that she has. She’s also realistic about where she is and where she needs to improve. She’s willing to put in the hard work day in and day out.”

Sobel maintains a 4.74 grade-point average amid a bevy of advanced-placement and honors courses. She made the Head of School every semester – the highest level of academic recognition at Sierra Canyon.

“To be in her presence and to feel that energy, it requires a lot of energy that that teacher has to give back,” Zielinski said. “She will not be satisfied with an answer that is confusing or vague. She is a hard worker, and she is receptive to criticism.

“If her initial paper is not where she wants it to be, she takes the comments and rewrites the paper. She will ask for a special conference about it. She will rewrite and rewrite until she gets it right.

“She’s a real pleasure to teach.”

Sobel said her dream is to attend UCLA or an Ivy League school. She said she is interested in pursuing a career in environmental studies or criminal justice.

“Every year I go to an Escape Room for my birthday,” Sobel said. “I like putting the pieces together, which goes well with law enforcement or the FBI.”

Sobel also started her own charity at age 13.

Her charity Shoes For Souls aims to shoe the homeless and has collected nearly 30,000 pairs of shoes, including 4,000 pairs since the pandemic started.

Sobel has launched her own website at www.shoesforsouls.com. She has been named a KNX 1070 NewsRadio Hero of the Week and has also receivied recognition from Spectrum News, the Los Angeles Daily News and other local media outlets as well as being named Chatsworth Youth of the Year.

“I like giving back to the community,” Sobel said. “I want to make a difference.”

Sobel’s rise in athletics is similar to her rise in theatrics, particularly breaking in with Sierra Canyon’s program that is ranked among the state’s best every year. Sierra Canyon is the 2016 and 2017 CIF champions and a 2017 state champion.

Making this squad requires a high level of ability and experience.

Yet Sobel carved out a key role as one of the team’s setters on Sierra Canyon teams that has won six consecutive Gold Coast League Championships.

“It has been great to see her improve and really earn that spot. She works to get to that level,” Wigfall said. “We have girls who have that courtesy spot – and they are great people, great individuals, girls with great energy. But that’s not Lindsay. She worked her way to a respectable level on our team, and that’s such a huge accomplishment.”

Sobel is often described as family-centric and has had tremendous family support throughout her life.

Sobel seems to thrive, especially with her father on-campus every day in a high-profile role.

“A lot of her success is a testament to her parents,” Wigfall said. “But her and David’s relationship is one of the most special father-daughter relationships. He supports her and believes in her, and allows her to believe in herself. Her mom does too obviously, but it is great to see that father-daughter connection.”

Sobel seems poised for greatness. And like her “The Last Duchess” monologue, Sobel is fully committed to every endeavor.

“The distance she came to master that text was much more impressive and powerful than someone who had trained for it,” Zielinski said. “When you see someone come out of their box and invoke their passion like that, it’s a very cool thing.

“It’s why we become teachers.”