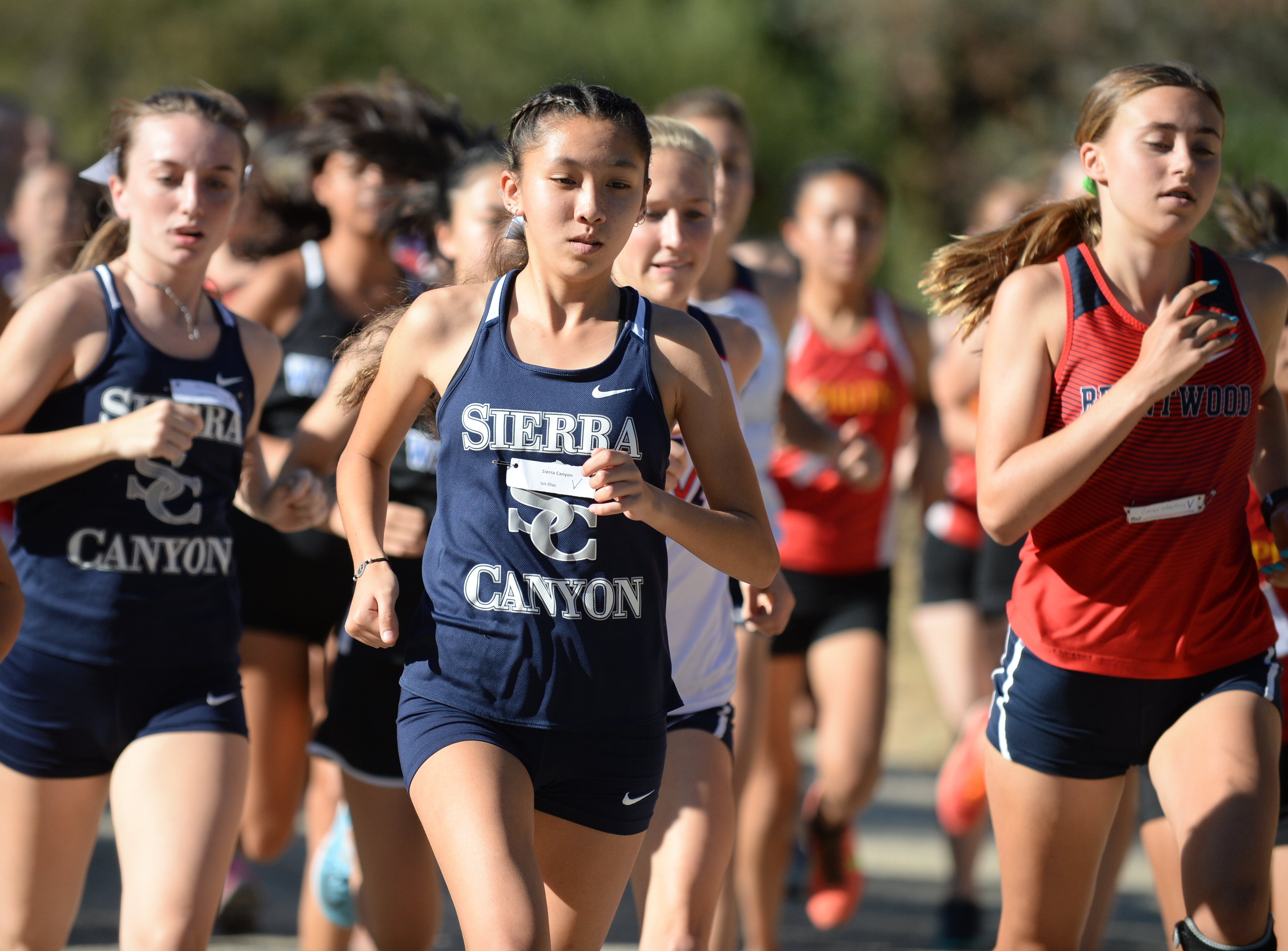 Call it a quiet fire.

Sierra Canyon junior Isis Diaz boasts the academic credentials that can certainly grab the attention of even the most prestigious of colleges, yet she is quick to help those around her.

“She radiates positivity,” said Sierra Canyon Spanish teacher Alice Lee, who had Diaz as a freshman. “She’s so capable, and I remember her being engaged every day. She’s a ray of light.”

On the cross country course, Diaz is more of a blur.

Despite her individual accolades and accomplishments, Diaz is the first to congratulate and encourage her teammates and basks in the glow of their accomplishments.

“I’ve seen her win races, turn around and start jogging back to cheer on the other girls on the team,” Sierra Canyon cross country coach Troy Samuels said. “Even at a practice recently where she was hurt and the other girls were passing her, she was yelling, ‘great job, keep it up.’ That’s a different kid.”

Diaz is the rare student-athlete double threat whose luminescent quality to share the spotlight makes her a perfect fit for Sierra Canyon’s Student First campaign that rewards excellence both in the classroom and in competition.

“I like to try to get everyone motivated,” Diaz said. “If it is a classroom assignment, I like to get everyone’s input and get everyone’s perspective. With a team, I try to motivate too. I might say, ‘One more girl, just go get her,’ or encourage them to try for their PR.”

Her academics alone would be impressive.

Diaz maintains a 4.18 grade-point average amid a bevy of advanced-placement and honors courses, making the Dean’s List in her first two years at Sierra Canyon.

Diaz is eyeing a major in either biology or biochemistry to be on the pre-med track. She has fixated on Michigan as her top college choice but also has her eye on Stanford and Columbia. She envisions a career as a neurosurgeon or anastageolist.

“She’s an exceptional learner who is always participating and is open to working with any kind of learner, and that’s always impressed me,” Lee said. “I also remember she would take all the extra credit opportunities. Not that she needed it, but she was always willing to challenge herself and to expand her knowledge.”

Even before enrolling at Sierra Canyon, Diaz had earned national acclaim in distance running as a six-time USATF Cross Country All-American and a two-time USATF Track and Field All-American. In 2017, Diaz was recognized as the USATF Best Girl Athlete in Southern California.

Yet Diaz set the tone for her Sierra Canyon career in her first race at the famed Woodbridge Invitational, closing a gap of nearly 500 meters in the final half-mile for a photo finish in which she was barely outleaned.

“That is the day I realized what this girl was all about,” Samuels said. “Her attitude and commitment to running is exactly how she approaches life.”

Diaz had a banner freshman cross country campaign, winning the Gold Coast League, finishing second at the CIF Southern Section Division 5 finals and eighth at the CIF State Finals, earning all-state accolades. As a sophomore, she took second in league, 8th at CIF and 30th at state.

In her only track and field season at Sierra Canyon, Diaz advanced to the CIF Masters Meet and was 0.3 seconds away from the final state meet berth.

“You can’t coach it, what’s in her heart,” Samuels said. “She’s strong-willed and she has her gift. When you get to the upper echelon of any level, the difference between everyone else at that level and the rest is what God sent you with, and she has it.”

Yet Diaz revels in the team’s success.

Diaz powered Sierra Canyon to a pair of breakthroughs as a freshman – winning a Gold Coast League meet for the first time and then bringing home the program’s first league team title.

“I was so proud of the team,” Diaz said. “I had no idea what the other teams were going to be like, but those were special moments. It felt pretty amazing.”

One of her highlights in track and field came through the lens of the team.

At the Gold Coast League finals, Diaz ran the third leg on the 4×400 relay and pushed hard before handing it off to Maya Bowens on the anchor.

Bowens delivered an exhilarating performance to help the Sierra Canyon relay team beat Campbell Hall for the first time after losing during the regular-season.

“In that moment, I had absolute faith in Maya. I knew she could do it, and I told her she could do it,” Diaz said. “The 4 x 4 is probably my favorite part of the track meet. Everyone is tired, and you see everyone’s grit come up.”

Lee said she was startled when she was driving in Porter Ranch one night and saw Diaz running.

“It felt so far away from campus,” Lee said, laughing. “But that’s Isis. Willing to go above and beyond.”