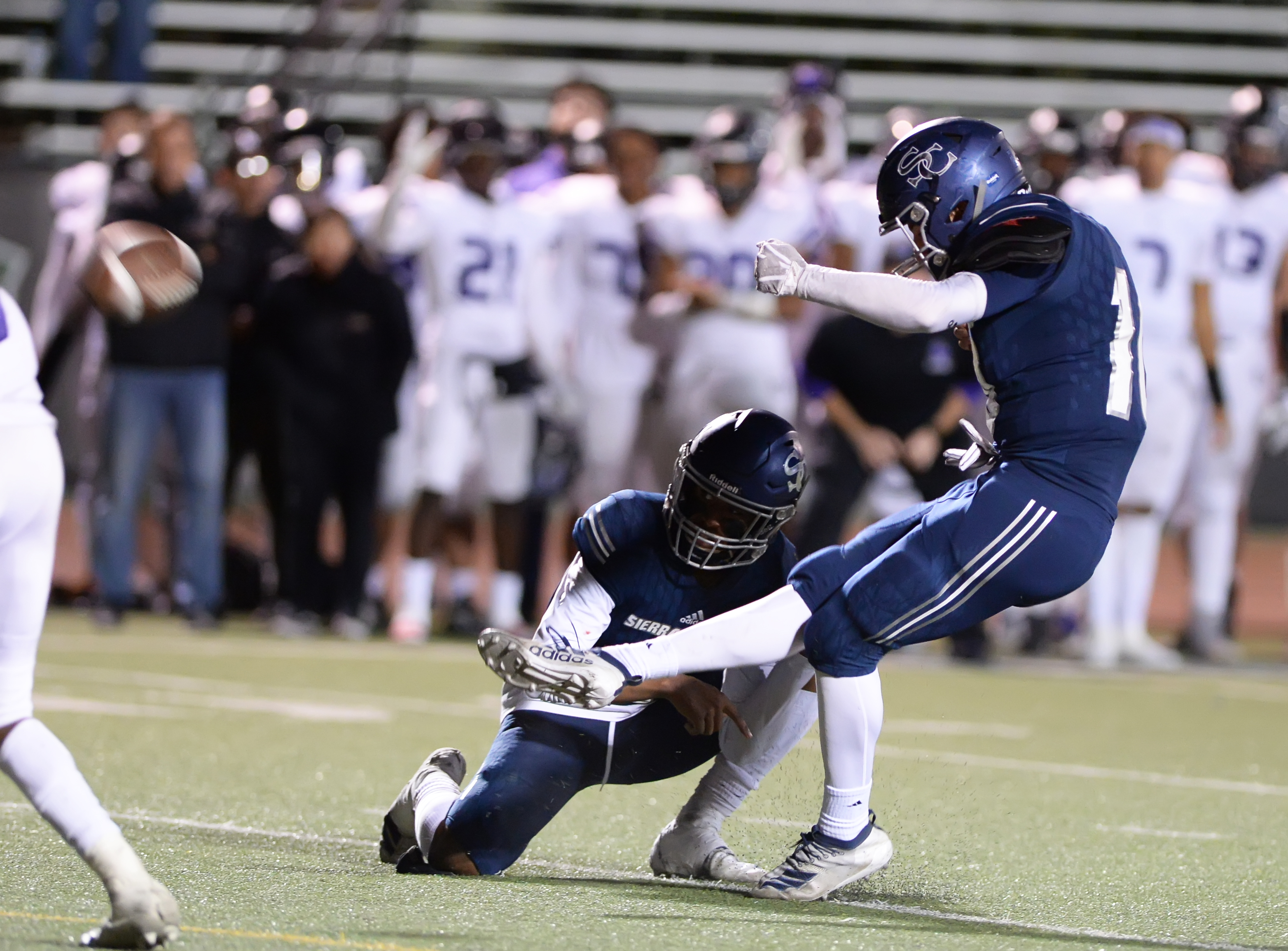 They would meet early morning. Or during study period. Sometimes at lunch or after school.

Sierra Canyon senior Josh Bryan and chemistry teacher Mary Espanol found ways to carve out time together as Bryan navigated a whirlwind schedule that included his commitment to the school’s championship football team and his rigorous academic workload loaded with advanced placement and honors courses.

“Our football team, it’s like a mini professional league, and the schedules are crazy,” said Espanol, a 40-year teaching veteran in her ninth year at Sierra Canyon. “You get students who want to do well in their courses and classes, and that’s what sets Josh apart. He made sure he did not miss time or assignments. He was always prepared for the tests.

“It’s amazing when you find kids who are passionate and who work so hard.”

Bryan was not just a highly recruited kicker and hard-hitting linebacker who sparked Sierra Canyon to back-to-back CIF Southern Section championships. His academic record is as impressive as his 50-yard field goals.

Bryan emerged as an ideal candidate for Sierra Canyon’s new Student First campaign that recognizes standout student-athletes who handled their business on the field and in the classroom.

“He is the epitome of what you look for in a student-athlete,” Sierra Canyon football coach Jon Ellinghouse said. “You do not hear many kicker-linebacker combos. That requires a different type of dedication. Off the field, he is quiet and focused. He’s not a diva. You never hear any complaints about him. He just gets the job done, no matter what.

“It’s impressive on his part and also on Sierra Canyon’s part because you have teachers who are willing to go the extra mile and make themselves available if a kid wants to excel.”

Bryan had a fairly simple time management method: just write it down.

“Sierra gives you a planner on the first day. So I just wrote in that and kept track of everything,” Bryan said. “If you try to remember on your own, it’s not going to work out.

“You just have to go to school and be able to communicate with your teachers. Communication is key.”

His results were as true as his field goals.

Bryan maintained a 4.25 grade-point average despite a gauntlet of a schedule.

Bryan credited his teachers, especially Espanol, who was both his honors and AP Chemistry teacher.

“What more could I ask from a teacher – she was with me every step of the way,” Bryan said. “As much as I work hard, the teachers here at Sierra were always there for me. That’s what’s great about Sierra Canyon. They were always willing to help out and make time for me.”

Espanol said she began to see the reserved Bryan expand his comfort zone during Espanol’s labs.

“He’s always doing his very best, and one of the things I tell my students is to love what they are learning. That is much more important than the grades,” Espanol said.

“Josh loves our lab experiments. He’s very intense, and he thrives in those environments. He’s a leader. He sizes up the labs, feels out the experiment and thinks about how he will apply it.”

Bryan said he plans to major in Pre Professional Studies that serves as the groundwork for a Pre-Med major. He is open to different ideas for jobs in the medical field.

“Big picture, I want to help others,” Bryan said. “I want to be there for someone, whether it’s helping them overcome an injury, or help with rehabilitation or helping children through sickness.

“There’s so many ways to help people. If I am able to go into a department I enjoy and make a difference, that would be my hope.”

The bonus for Bryan is that he will get an opportunity to follow this path while attending prestigious Notre Dame and getting a chance to kick for a program steeped in tradition and history.

“He was the top-ranked kicker in the nation, and now he gets to play at Notre Dame. That’s one of the coolest experiences,” Ellinghouse said. “We want our kids to do great things. He’s a great example of how he came in and became a well-rounded young man.

“He’s ready to tackle the world and be successful in whatever he does.”