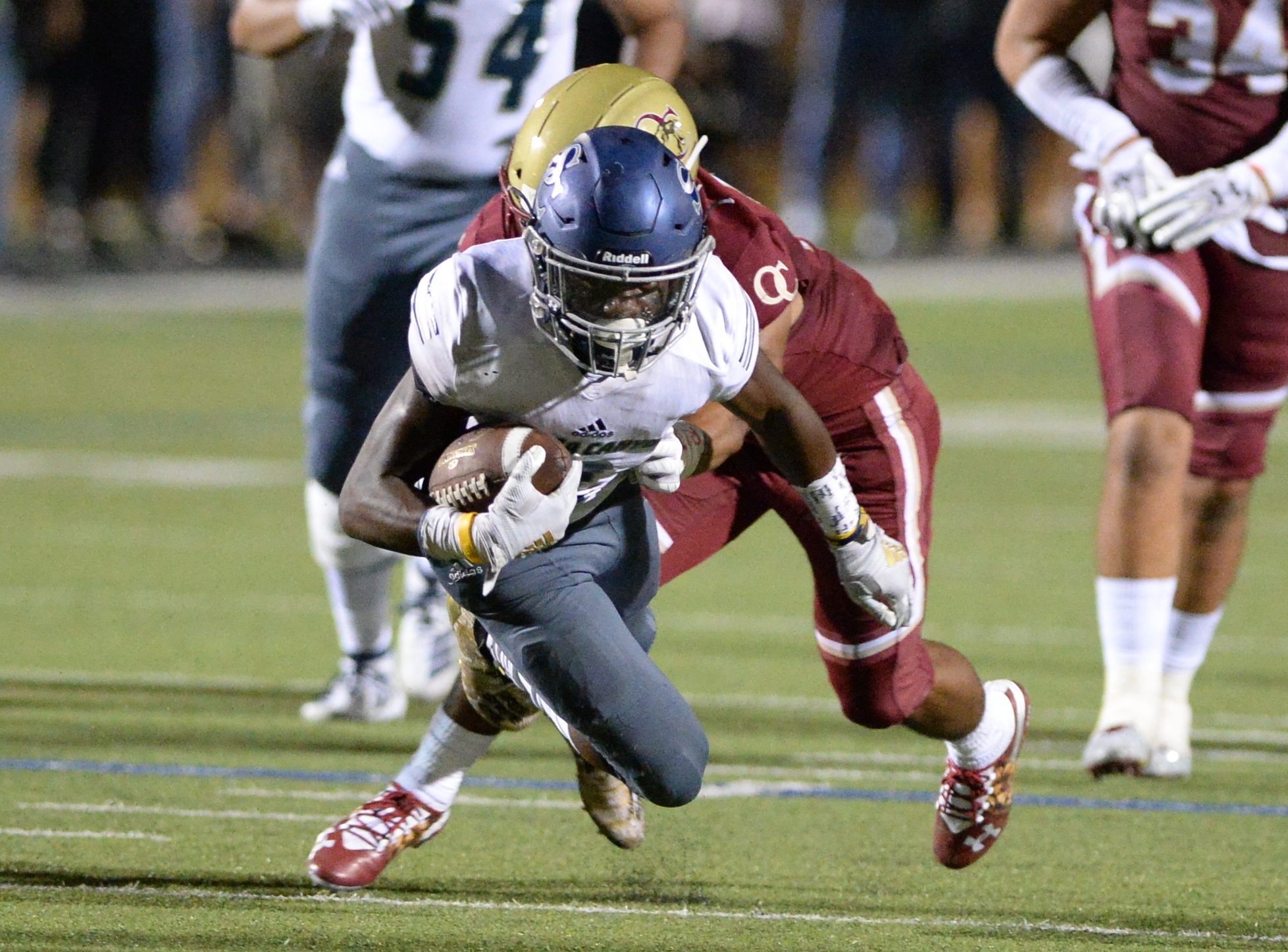 Football season finally arrives for Harvey and the Trailblazers

For a moment, Sierra Canyon blue-chip football recruit D.J. Harvey was gone.
The temptation to graduate early and jumpstart his collegiate career at powerhouse Virginia Tech seemed awfully appealing, especially with the uncertainty of the pandemic and the departure of quarterback Chayden Peery, who graduated early to attend Georgia Tech.
“I was going to leave,” Harvey admitted. “I was going to go to college. But I got a sign when I was at home, working out. A voice in my head.”
It very well might have been the voice of Sierra Canyon football coach Jon Ellinghouse, who has consistently preached about the importance of tradition and leadership.
Harvey finally heard the Senior Call.
“Coach House always talked about being here for the guys and being a leader,” Harvey said. “He said to look at all the dudes before me, to look at what they did and how they helped the younger players. I wanted to be here for them.”
On Tuesday, Harvey learned he will get his chance to officially play his senior season.
Los Angeles County met the health threshold to resume youth outdoor sports, and Sierra Canyon locked in a doozy of an opening matchup on March 12 at reigning CIF Southern Section and State Open Division champion St. John Bosco in Bellflower.
It is a juggernaut matchup for a Sierra Canyon team that Ellinghouse has called potentially the best he has had in his 12-year tenure.
Ellinghouse told the Los Angeles Daily News that he envisions a 6-game season before the CIF Southern Section’s season end date of April 17.
“We’re deep,” Harvey said. “We’ve got a lot of athletes. And our guys go both ways.”
Harvey is coming off a banner season in which he caught 84 passes for 1,465 yards and 7 TDs while making 4 interceptions on defense for a Sierra Canyon team that captured CIF Southern Section and Southern California Regional titles.
Even with Peery at Georgia Tech, Harvey said he likes the potential of Sierra Canyon’s quarterback corps that includes Ryan Staub, Alonzo Contreras and St. Bonaventure transfer Danny Duran.
“All our quarterbacks are going to be involved, and they all bring something different and unique,” Harvey said.
Harvey said he has been staying sharp with his workout group that have become some of his closest friends.
Harvey said that he has had consistent workouts with Kamari Ramsey, Zeke Larry, Eli Larry, Drue Watts and JD “Quatro” Sumlin since elementary school.
“I wanted to come back for the guys and to get a better understanding of the game and myself,” Harvey said.
Harvey said he appreciates the opportunity to play for an iconic program like Virginia Tech.
“The coaches there, it’s a good atmosphere. It reminds me of the Sierra coaches,” Harvey said.
“I’m from Palmdale, and I want to represent Palmdale the right way.”