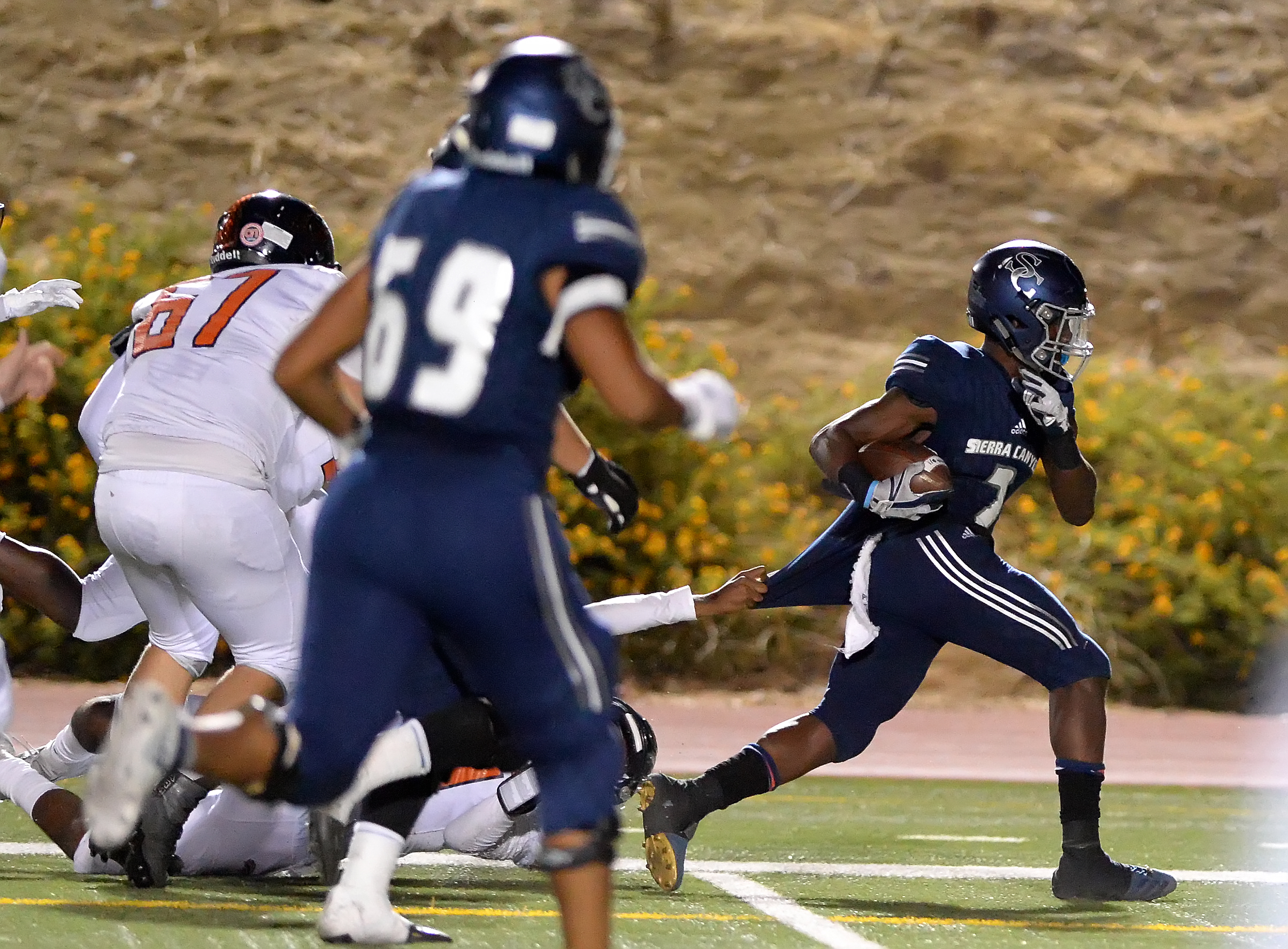 The Sierra Canyon football keeps moving along at a nice pace. The Trailblazers scored four touchdowns in the first quarter for the second week in a row and rolled to a 55-27 victory against Roosevelt of Eastvale in a Div. 3 first-round playoff game at Pierce College in Woodland Hills.

Sierra Canyon led 13-0 by the 5:11 mark of the first quarter and then scored two more touchdowns in a 1:34 span near the end of the quarter. Sierra Canyon (8-3) eventually led 33-7 in the first half before watching Roosevelt close to within 33-27 in the third quarter with 6:39 remaining.

However, the Trailblazers responded with three more touchdowns to put away the pesky Mustangs (5-6) from the Big VIII conference, which includes Div. 1 state powerhouse Corona Centennial.

E.J. Gable rushed for 205 yards on 15 carries, including three first half touchdowns. Gable nearly had a fourth score but was tackled one yard short of the end zone after a 75-yard run.

Chayden Peery completed 5 of 13 passes for 118 yards, including a 19-yard touchdown to J.D. Hernandez.

Roosevelt’s biggest threat was quarterback Kenzel Lawler. Lawler completed 16 of 29 passes for 208 yards, including a 46-yard touchdown to Ray Rivera. Lawler was quite nimble on his feet eluding would be tacklers time and time again for 56 yards on 21 carries.

Roosevelt racked up 131 yards on the ground with touchdowns from Lawler, Dorien Mars and Tyler Bush. Bush had a 1-yard scoring run to trim the advantage to just six points midway through the third quarter.

The game was marred by nearly 30 penalties. Fales starts and offsides ruled the night with the occasional pass interference or unsportsmanlike conduct.

Sierra Canyon’s defense stepped up with four interceptions and a fumble recovery. D.J. Harvey, a sophomore, had three interceptions.

Sierra Canyon moves into the quarterfinals next week and will play at Moorpark (8-3), a 42-28 winner against Hart. The game will be an interesting one with Peery going up against Steven McDaniel. Gable battling Alec Powell and the Trailblazers receiving corps trying to match USC-bound Drake London, a huge threat on the outside going long.

The winner will move into the semifinals on Nov. 16th against the Citrus Hill-Downey winner.