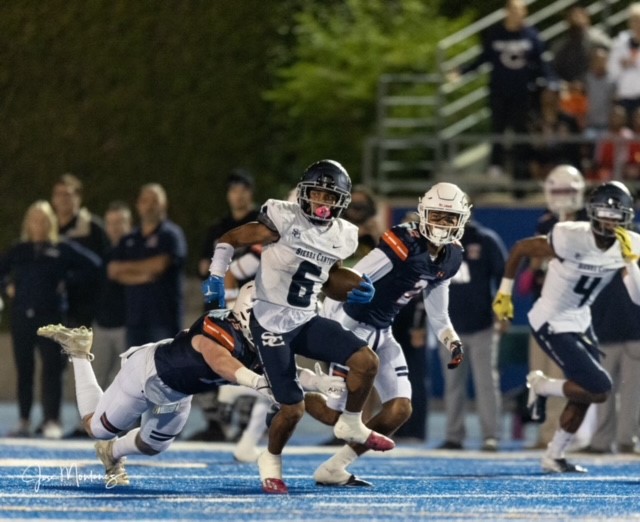 The Sierra Canyon football team has picked the right time to start hitting its peak.

The victory not only likely gives Sierra Canyon 5-4, 3-1) a share of first place pending a win over hapless Notre Dame next week, but keeps the momentum going and helps turn the season around for the Trailblazers.

“We obviously played really well tonight, Sierra Canyon coach Jon Ellinghouse said. “I am real proud of my guys. We learned something about ourselves. We are real capable of playing some real good football.”

Chaminade came in with a perfect 8-0 record and had beat three teams Sierra Canyon had lost to (Oaks Christian, JSerra and Bishop Amat). Go figure.

Leading 14-7 after a Jalen Barbarin 70-yard touchdown a few minutes into the third quarter, Sierra Canyon was caught on its heels. Momentum was swinging in Chaminade’s favor.

However, Xavier White blocked a punt and Huntington Cooper scooped the ball up and ran 18 yards for a touchdown to give the Trailblazers the two touchdown advantage, again.

Alonzo Esparza connected with former Chaminade player Ruben Gamboa for a four-yard touchdown pass, Dane Dunn caught an 80-yard catch-and-run touchdown pass from Esparza, Dunn rushed for a one-yard score and sophomore Damon Wrighster finished the night with a 45-yard quarterback keeper. Wrighster was untouched on his way to the end zone.

The first 24 minutes was even better than the final 24.

Another drive stalled at the 2-yard line but covered 96 yards. Terrell “Choppa” Cooks scored from 29 yards out. Sierra Canyon took a 14-0 lead at halftime and held Chaminade (8-1, 3-1) to 31 yards offense with a turnover.

Sierra Canyon out gained the Eagles 483-216 and forced Chaminade into six three-and-outs.

“We played well in every phase,” Ellinghouse said. “It was a total team effort. It feels good”

Cooks finished with 149 yards on 15 carries and Dunn had 112 yards on 19 carries. Dunn accounted for three touchdowns.

Barbarin had 94 yards on nine carries, San Diego St.-bound QB Javance Johnson was 8 of 18 for 82 yards and rushed for 20 yards on 10 carries. Johnson was continually running for his life all night and was brought down five times in the backfield.