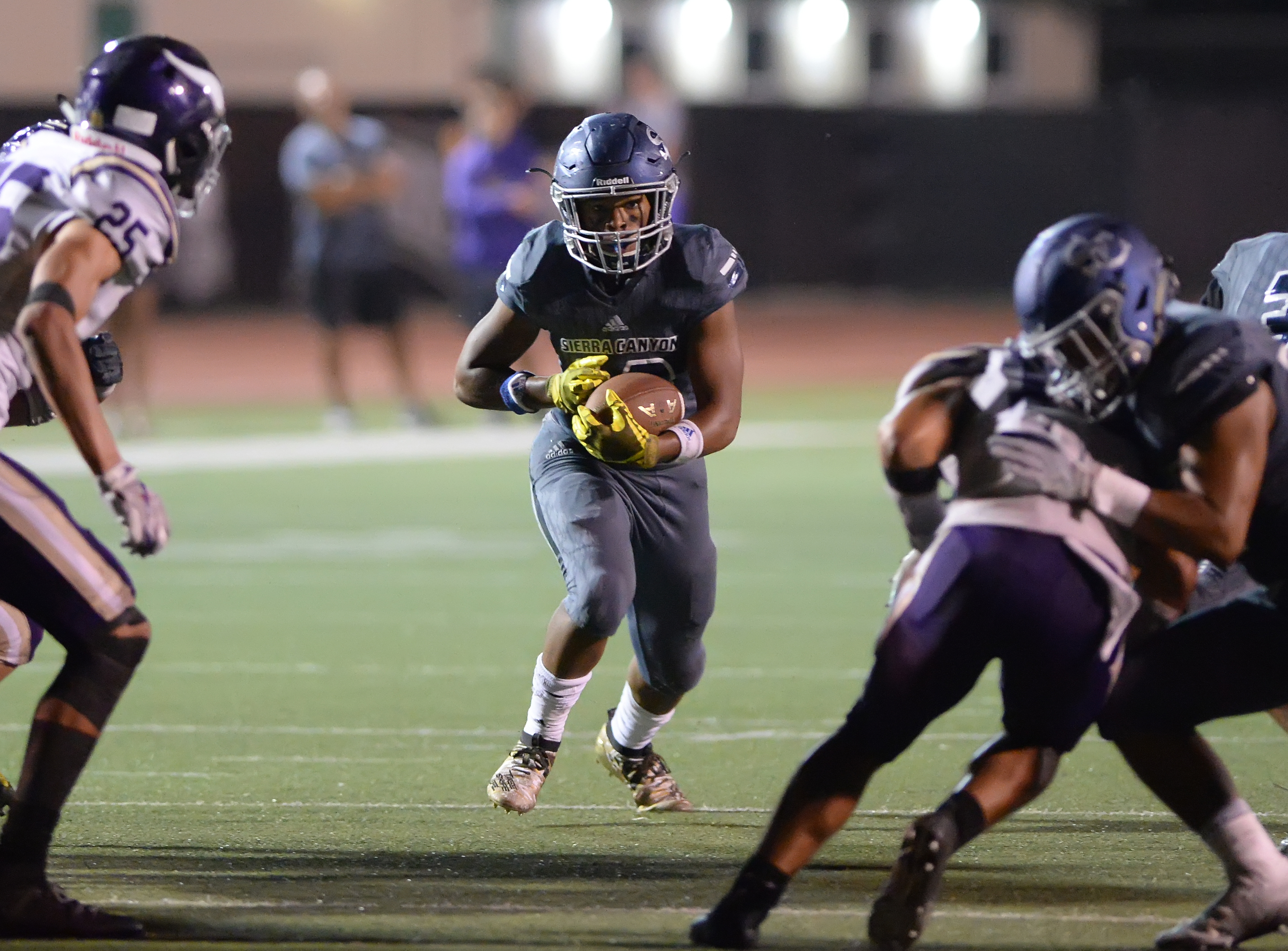 Thanks to a strong performance by sophomore running back Jason Jones, Jr., the Sierra Canyon Trailblazers (3-1) defeated the Valencia Vikings 28-10 as the schedule had both teams playing on an unusual Saturday night at Granada Hills Charter High School.  The Trailblazers were able to bounce back with a workman-like effort and Jones’ late game burst to help wipe away the memories of their disappointing loss last week against Oaks Christian.

Both teams started the game off slowly, each throwing an interception, before Valencia’s Ryan Morrison completed a 40-yard touchdown pass to Jake Santos, putting Valencia up 7-0.   Only a couple minutes later, the Trailblazers were able to respond with a score of their own as running back Hunter Williams scored on a 1-yard dive.  Williams’ short touchdown run was set up by Chayden Peery’s 44-yard pass to Terrell Long earlier in the drive.

The Vikings were not able to capitalize off two long passes by Morrison, both combining for over 70 yards, as they settled for a field goal before the Trailblazers took a 14-10 lead going into the half as Peery completed a 10-yard touchdown pass to Donovan Williams with 20 seconds left to go before the break. After a scoreless third quarter, which consisted of a blocked field goal by Valencia and a botched punt return that was recovered by Williams: JD Sumlin scored a 12-yard touchdown run as Sierra Canyon expanded their lead to 21-10 early in the fourth.

Sierra Canyon’s defense dominated in the second half as they gave up no points for the rest of the game, accumulating two interceptions by D.J. Harvey and two sacks by Cole Bullock to keep the Vikings at bay, before the offense closed off the night with a lightning strike touchdown run of 74-yards by Jones who had a career night rushing for 172 yards with more than 150 of those yards coming in the second half to carry the Trailblazers.  Workman-like, indeed.

The Trailblazers will have to travel to Santa Fe Springs for Friday’s game where they hope to add another win to their record as they take on St. Paul (3-1), while the Vikings will try to bounce back at home as they will host Santa Fe (2-2).