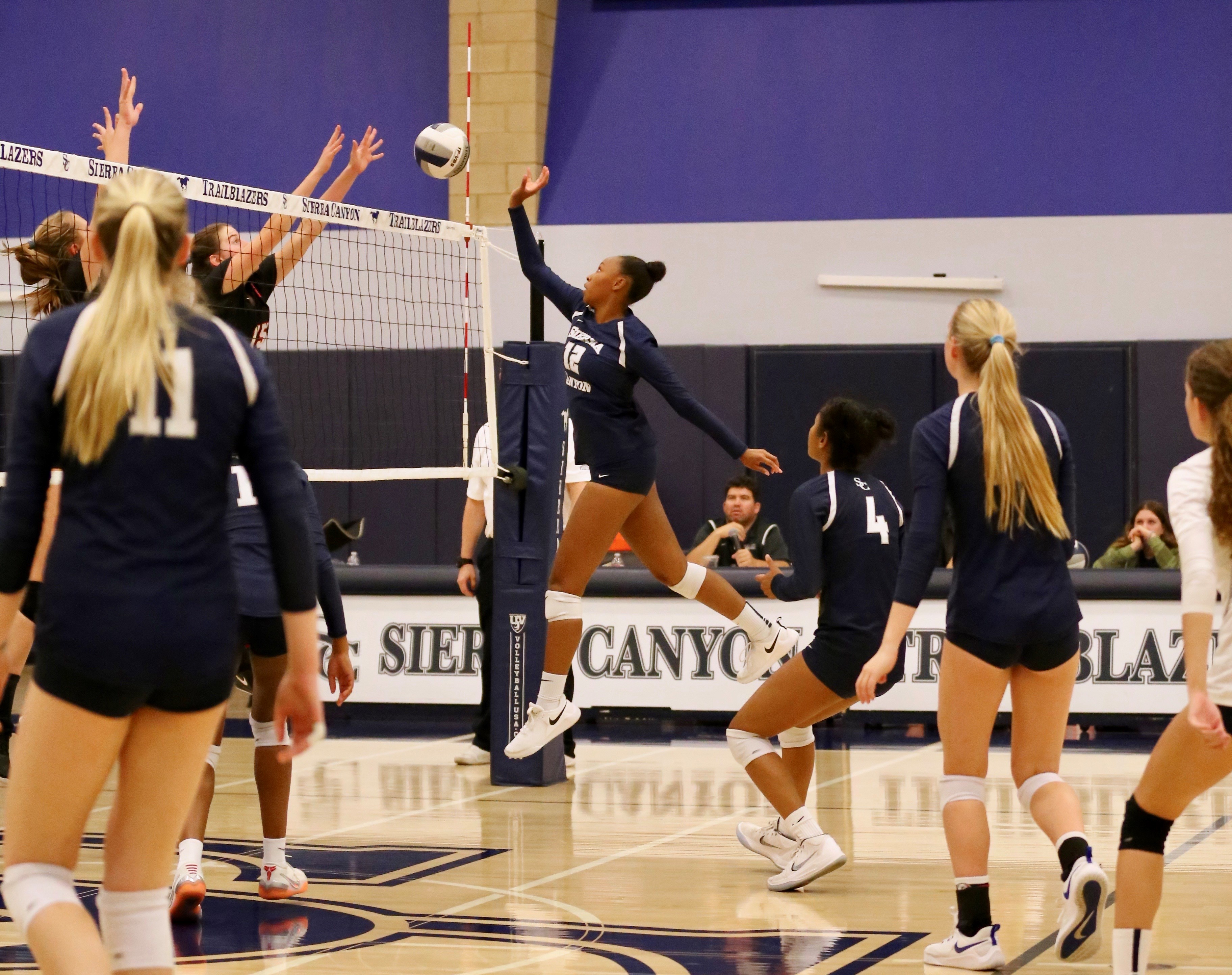 SANTA ANA – The end of the road finally came for the Sierra Canyon girls volleyball team. Although the Trailblazers will compete in the Open Div. state playoffs the week of Nov. 5th, the Southern Section playoff tournament ended Saturday after a 25-15, 26-24, 25-15, 25-18 setback against top-seeded Mater Dei in a Div. 1 semifinal match.

“We have been going back and forth on this line of just being happy to be here and wanting to really win this whole thing,” Sierra Canyon coach Stefanie Wigfall said. “We know we are very good. I am so proud of the girls. We ran into the best team out there.”

Sierra Canyon had a good look at the match after rallying for a huge second set victory. Sierra Canyon took a 6-1 lead before falling behind 13-9. But the Trailblazers recovered and earned a split of the first two sets when freshman Sidney Montgomery served an ace. It was 1-1 and optimism was high.

However, Mater Dei quickly regrouped and looked more like the team in the third and fourth sets that it was in the easy first set win when the Monarchs raced to an 11-2 lead and never looked back going up 22-11 at one point.

Stanford-bound Natalie Berty led Mater Dei with 19 kills. The 6-foot-3 outside hitter was powerful and physical. Berty had plenty of help.

Mia Tuniga, a junior setter committed to Long Beach St. had 14 kills, 25 assists and three aces. Tuniga was in on almost every play.

Mandalay Rennon contributed 24 digs and went over the 1,000 career mark. Rennon is headed to Nevada next August.

The season is not over for Sierra Canyon. Michigan-bound May Pertofsky and Yale-bound Zoie Stewart have the state playoffs to look forward to after a 2017 campaign that saw the Trailblazers capture the state Div. 2 title and the section Div. 3 title.

“We have gone from Div. 6 all the way up to Div. 1,” Wigfall said. “Not bad for a little school in Chatsworth. The seniors really wanted to leave a legacy and I think they have made a pretty good mark to live up to.”

Mater Dei advances to play Marymount in Saturday’s championship match at Cerritos College. It will be the Monarchs (38-2), who are ranked No. 2 in the country by MaxPreps, sixth consecutive championship game appearance.