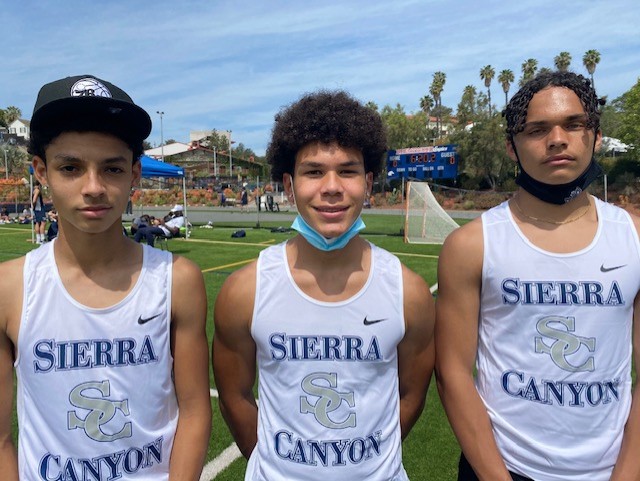 Track team off to fast start

They saw him burst off the starting line.

They watched as he rounded the new Brentwood track and were somewhat astonished by what Sierra Canyon freshman Alexander Bowens had just accomplished.

Back-to-back victories in the 400 meters in his first two Gold Coast League meets was certainly an impressive way to start his high school track and field career.

“I was excited, Alexander was excited and the guys came up and congratulated him,” Sierra Canyon track and field coach Troy Samuels said. “They were proud. They had this look like, ‘Look at that.’ They were definitely surprised.”

In a year marked by uncertainty and change, Bowens’ emergence was certainly enlightening.

The Sierra Canyon school record of 51-plus seconds is certainly in range for Bowens, who was also the No. 4 overall Gold Coast League runner in the 200 meters in 24.41.

“He’s had some pretty good performances, and for several reasons,” Samuels said. “Reason A, he’s just a freshman. And Reason B, he is still not in his top running shape yet, just like most of these kids out here. They have not had a chance to build a foundation.

“I would venture to say if this was a regular, non-COVID season, he would break the school record this year. I definitely think he can do it by next year. He’s a great kid, and I am looking forward to coaching him the next few years.”

Only two other freshman boys – Cole Crawford and Kingston Askerneese – have competed.

“For our little MOD squad, they were pretty impressive,” Samuels said.

The Sierra Canyon girls distance core – which won its first league title in 2019 – decided to sit out this track season to focus on the fall season.

This decision allowed star distance runner Isis Diaz – an all-state cross country runner as a freshman and sophomore who qualified for the CIF Masters track and field meet as a sophomore – time to regroup and heal.

Samuels said Diaz has been battling tight hamstring soreness and has participated in weekly physical training to try to overcome the injury.

“She just started training again with us, and it was good to see her out here because I saw the brightness in her face.”

Samuels expressed excitement about an uptick in his middle school numbers this season.

“I think with COVID, a lot of the parents sent their kids to track to give them something to do,” Samuels said. “We don’t even have any meets for them yet, but they are showing up everyday and learning to be active.”

“My goal this season was to allow the kids to compete, to do it safely and avoid injury,” Samuels said. “If they have an opportunity to run and be in the best shape possible, then I would consider this a successful season.”