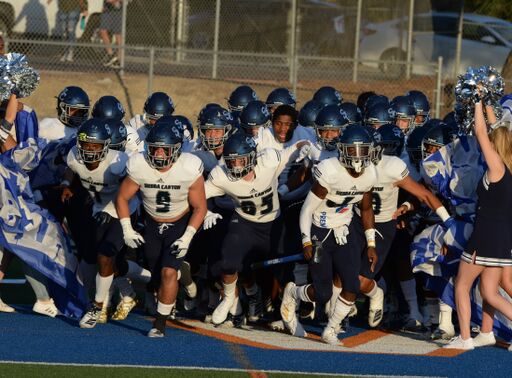 The Sierra Canyon football team started from the bottom and now its at the top.

For the first time in school history, the Trailblazers will have a chance to be in the Southern Section’s highest playoff division. Not too bad for a program that was playing 8-man football just over a decade ago.

After four section championships and two state championships, including last year’s section Div. 3 championship and I-A state title appearance, Sierra Canyon has been included in the grouping of teams that will make up Divisions 1 and 2.

“It’s great for our school, for our players, for our community,” Sierra Canyon head coach Jon Ellinghouse said. “We have put in a lot of hard work and effort to get to this level and we still have work to do.”

Ellinghouse has a full cupboard for 2019. Chayden Peery is back at quarterback after throwing for 2,886 yards and 18 touchdowns to help lead Sierra Canyon to a 12-4 overall record, including winning 12 of 13 games before the 19-17 state title game setback. Peery will have stiff competition from youngster sophomore Amari Powell who starred on the JV team as a ninth-grader and is a dual-threat straight up athlete.

Peery has plenty of help in the backfield and plenty of guys to throw the ball to. D.J. Harvey is a top recruit as a wide receiver/cornerback. Harvey is a junior with explosive big play capability. Peery can also go to Zach Thannum, Donovan Williams, Oliver Hanlon and Micah Robinson.

“We have a lot of weapons and a lot of playmakers,” Ellinghouse said. “It’s always a plus to have options.”

The defense will be anchored by J.D. Hernandez (168 tackles a year ago), Josh Bryan (123 tackles) and Cole Bullock (109 tackles). Bryan is also one of the country’s top place kickers.

The program has also added a few newcomers ready to make an immediate impact. Keep your eye on defensive back Terrell Long (Harvard-Westlake), senior defensive lineman Reggie Jones (Antelope Valley) and star-in-waiting Michael Wooten, Jr., a 6-foot-6, 290-pound linemen from Norcross, Georgia. Jones is a 6-foot-3, 315 pounder who has relatively gone unknown up in the High Desert. And don’t forget about Dominic DeBerry, a 6-foot-4, 270-pound lineman from Valencia.   Two imports from Alemany will be ready to contribute. Gavin Quiroz is an offensive guard and brother Jake Quiroz is a defensive end. Gavin will team with junior Jason Gilmore to lead the offensive line.

“We are bigger than we’ve ever been up front,” Ellinghouse. “We like what we have. We like where we at.”

The schedule is again one of the best in the area. The Trailblazers will be challenged. The season opens up with a nonleague at Westlake and also features Lawndale, Oaks Christian, Valencia, Bakersfield, St. Paul, Crespi, San Pedro, Grace Brethren and a Gold Coast League showdown with longtime rival and nemesis Paraclete.

Sierra Canyon opens the year ranked No. 1 by MaxPreps in its small-schools national poll.