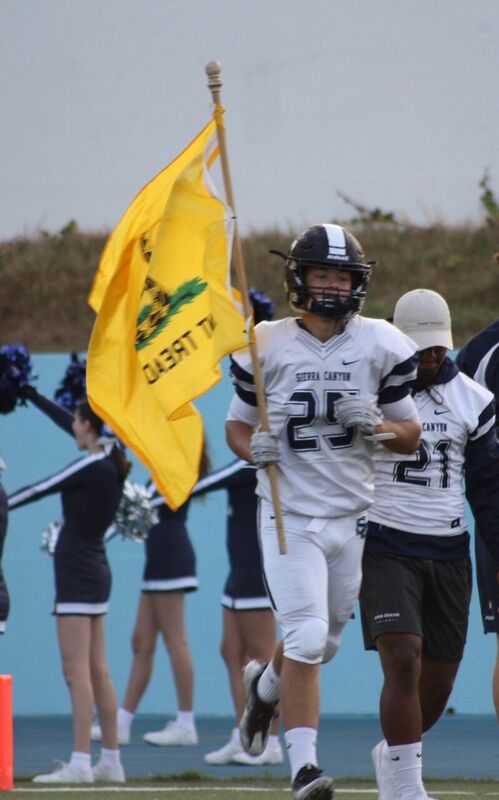 Pacific Palisades – The Sierra Canyon Trailblazers football team (2-0) returned to the Golden State with a resounding 36-0 victory over the Palisades Dolphins (0-1) at the Stadium By The Sea on Friday night.

Over the last two weekends, the Trailblazers road experiences could not have been more different. Last week, the team played against a picturesque backdrop that included the mountains of Utah, a game-time temperature hovering above 90 degrees and a bus trip that covered almost 1,200 miles. The Trailblazers left Utah with a 30-20 victory.

On Friday night, the team traveled less than 20 miles down the 405 freeway, played with the Pacific Ocean in the background with temperatures below 70 degrees. The Trailblazers had no troubles adjusting to the scenery on the way to victory.

Senior quarterback Niko Harris started the team on the right foot, leading the Trailblazers down the field on a six play, 65 yard drive, that concluded with a seven yard touchdown strike from Harris to JJ Hernandez.

“I have to give all of the credit to the offensive line,” Harris said. “They gave me plenty of time to complete my reads and survey the field.”

The Trailblazers led 36-0 at half and Harris would not return in the second half.   Despite playing only half the game, Harris had a career night, completing 12 of 13 passes for 206 yards and four touchdown passes.

“We have a lot of weapons on this team and a lot of depth,” Harris said. “We are getting better each week.”

Harris’ primary target was senior wide receiver Dylan Tait who has made a smooth transition from being the slot receiver last season to being the team’s key receiver. He caught five passes for a total of 141 yards and two touchdowns.

“Making the adjustment has gone very well,” Tait said. “Niko and I spent a lot of time together in the off-season and it shows. We are a super balanced team with lots of different options.”

The Trailblazers are on the road this Friday night as they travel to face the Buena Bulldogs from   Ventura (1-0) who opened the season with a 42-0 victory against Royal High School.